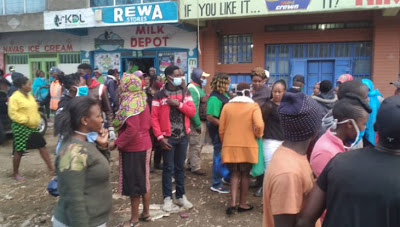 Shock hit Naivasha town after a woman poisoned her four children to death on Saturday afternoon.

Beatrice Mwende Kimotho, 42, is alleged to have locked her children in the house before giving them poison at Kabati Estate.

The children were aged between two years and eight years old.

According to the police, they received a distress call from Jackson Kimani Kimotho, the woman’s brother saying that she had asked him to check on the children whom she had killed at her house.

The police officers gained entry into the two-bedroom house and found the bodies of the four children, three girls, and a boy, on their beds with traces of vomit and blood on their mouths.

He said that his sister shared pictures of the children in a family WhatsApp group after killing them asking for prayers.

Further, the brother said that she left behind a suicide note in she explained her drastic decision.

The woman said that she took her children’s lives because she had lost her job and was unable to cater for them.

One of her neighbours, Andrew Opiyo, said the tenants were concerned because they did not see the children playing outside on Saturday as is their routine, prompting them to raise the alarm.

The woman’s brother said that she was out of her job in a local non-governmental organisation run a church that was hit hard by the coronavirus pandemic.

“We have been engaged in a program run by the Catholic Church that trains youth and links them with potential employers,” said Kimani

Naivasha OCPD Samuel Waweru said they arrested the woman from her hideout in Kayole Estate in the same town.

She was taken to the Naivasha Police Station while the bodies of her children were taken to Naivasha Hospital mortuary.

MUST READ! CSP Dolapo Badmus advises Nigerians on how to identify...