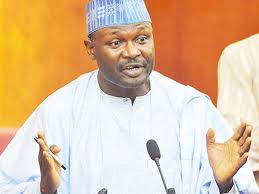 The Independent National Electoral Commission (INEC) has released the final list of candidates for the governorship elections.

In the list released on Thursday, the All Progressives Congress (APC) had no candidates in both Rivers and Zamfara states.

A court of appeal sitting in Port Harcourt, Rivers state, had ruled the party cannot field candidates for the forthcoming elections.

The state high court had in a ruling voided the party’s congresses, saying they were conducted in outright violation of subsisting court orders.

Similarly, a federal high court in Abuja had ruled that the party did not conduct valid primaries in Zamfara and therefore is ineligible to field candidates for the elections.

Buruji Kashamu was finally listed as the candidate of the Peoples Democratic Party (PDP) in Ogun state, putting to rest a lingering dispute over who is the party’s flag bearer in the state.

There are a total of 1,066 candidates for the governorship elections to be conducted in 29 states.