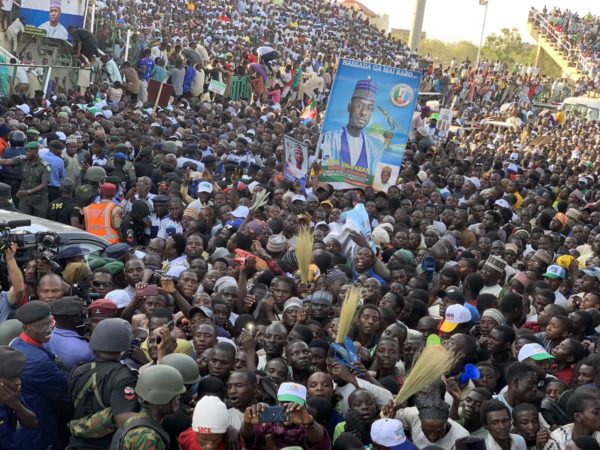 President Muhammadu Buhari proved once again in Kano today to be a peerless record crowd puller.

Tens of thousands of APC supporters could not gain entry into the main bowl of the Sani Abacha Stadium in Kano, where he held his campaign rally Thursday.

The crowd logjam evoked memories of 2015 in the same city, capital of Kano State.

The stadium was filled to the brim, forcing the crowd to flow into the abutting streets.

NAN reports that party supporters began trooping to the stadium as early as 7:30 am, with all roads leading to the stadium filled to capacity as motorists, commuters and pedestrians jostle for space to get to the venue.

“It is a recap of the huge crowd recorded in 2015,” Alhaji Sabiu Gabari, an excited staunch supporter of Buhari said.

“President Buhari has proven to all doubting Thomases that he is a crowd puller and is set to win the forthcoming elections convincingly.

“Today’s crowd is an emphatic vote for the president’s second term bid, and I don’t expect people to make the mistake of bringing the PDP back to power,” Gabari added.

During a pre-rally visit to the Emir of Kano, Muhammadu Sanusi 11, President Buhari said his visit was not only to seek for re-election, but to also commend the people for their tireless support to his administration.

“I am in Kano not to tell the people what we are doing to develop the country, but to remind them on the need to perform their civic responsibilities by voting right candidates.

“This is because I believe they are aware of what we are doing,” he said.

He commended the people for welcoming him all the way from the airport to the Emir’s palace.

Buhari assured them of his determination towards moving the country to the next level.