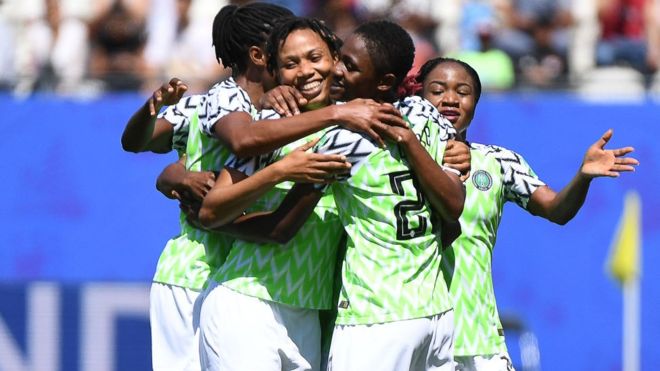 The Super Falcons moved to the third round of CAF’s 2020 Tokyo Women Football Qualifiers after beating Algeria 1-0 at the Teslim Balogun Stadium in Lagos on Tuesday to qualify 3-0 aggregate.

The Falcons had defeated the North Africans 2-0 in the first leg in Algiers, the News Agency of Nigeria (NAN) reports.

The African champions’ foreign-based players, who were absent in the first leg, could not make a statement with their performance in the first half of the match.

The attack led by FC Barcelona Women forward Asisat Oshoala were however asking all the questions as they piled pressure on the Desert ladies in search of a goal.

The Algerians, on the other hand, were solid in the defence to keep the Falcons at bay.

However, luck ran out on the visitors as Oshoala made a brilliant solo run for a perfect finish in the 59th minute.

The lone goal was enough to send Thomas Dennerby side to the third round against either Mali or Cote d’Ivoire.(NAN)