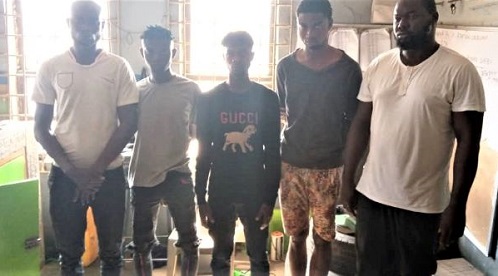 Five persons have been arrested by the police in Ogun State for the alleged murder of a 25 year old man, Monsur Kareem.

The suspects – Toheeb Popoola; Ibrahim Ridwan; Mutiu Tijani; Akeem Ishola and Lawal Afeez – were arrested on May 13, for allegedly beating Monsur to death.

According to a statement on Sunday by the Police Public Relations Officer (PPRO) of the Ogun State police command, Abimbola Oyeyemi, the suspects were nabbed following a report by the father of the deceased, Najeem Kareem, who reported the matter at Sango Police Station.

The victim’s father had reported that his son was beaten to coma by the suspects following a minor misunderstanding he had with Toheeb popoola. He was rushed to the hospital but was confirmed dead by the doctor.

“Upon his report, the DPO in charge of Sango Division, CSP Godwin Idehai, led detectives to the scene at ijoko Area where the five suspects were apprehended.

“Preliminary investigation revealed that a landlord in the area was riding a tricycle loaded with kegs of water and fell with the kegs of water. And while picking up those kegs, Toheeb popoola, whose house was situated close to the location, came out to question him for his reason of staying there.

This led to an argument between them and it was at that point the deceased met them and tried to intervene.

“His intervention did not go down well with Toheeb, who invited the other four suspects to the scene and ordered them to beat both the deceased and the tricycle man up. In the process, the deceased was rushed to the hospital where he was confirmed dead.

“The corpse of the deceased has been deposited at the morgue of. Ifo General Hospital for autopsy”. Oyeyemi stated.

Meanwhile, the Commissioner of Police in the state, Kenneth Ebrimson, has ordered the immediate transfer of the suspects to the  Homicide Section of the State Criminal Investigation and Intelligence Department for discreet investigation and diligent prosecution.