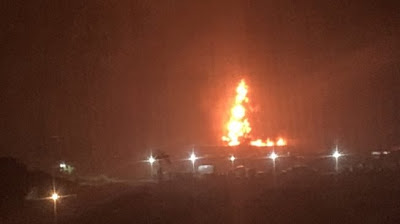 Many persons were trapped when a tanker exploded at the Kara axis of the Lagos-Ibadan expressway on Sunday morning.

Although the incident happened after midnight, a lot of vehicles were on the bridge as a result of the curfew imposed to check the spread of coronavirus.

The federal government had ordered a nationwide curfew from 10pm to 6am and vehicles which are unable to make it to Lagos or leave the nation’s commercial capital before 10pm are usually stranded on the bridge till 6am when security operatives open the road to traffic.

Details of Sunday’s incident are still sketchy but a witness said the fire started after a loud bang.

On social media, some residents of Magodo, Berger, and Ojodu narrated how they could see billow of smoke from afar.

Firefighters have been battling to put out the inferno. At 2:01am, the Federal Fire Service pleaded that there should be no vehicular movement around the area.

“Kara Bridge Fire, men of the Federal Fire Service are already at the scene. Please vehicular movements should be halted around the area,” the tweet read.