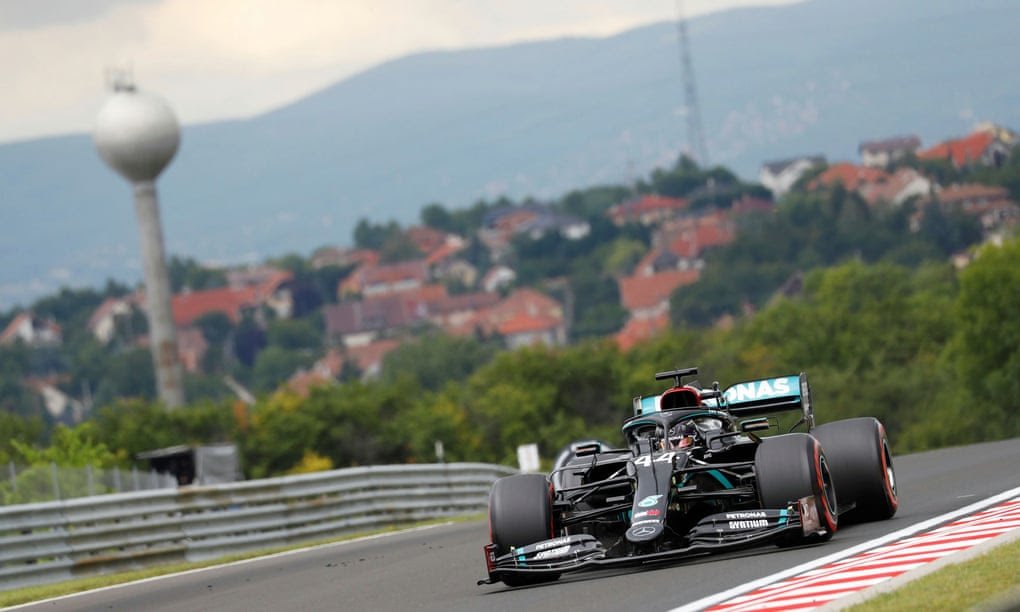 Lewis Hamilton delivered another masterclass to take pole for Sunday’s Hungarian Grand Prix. The Briton said his remarkable achievements over the single lap, with 90 poles now and counting, were almost hard to take in. His Mercedes team, however, served blunt evidence in Budapest they are in a class apart, locking out the front row and to what could be considered the front-four places.

Hamilton now occupies rarefied air indeed in the qualifying pantheon. His seventh pole in Hungary matches the track record held by Michael Schumacher and he is the first driver to reach 90 poles, 22 more than Schumacher and 25 more than his hero, Ayrton Senna. Numbers he conceded felt almost implausible. 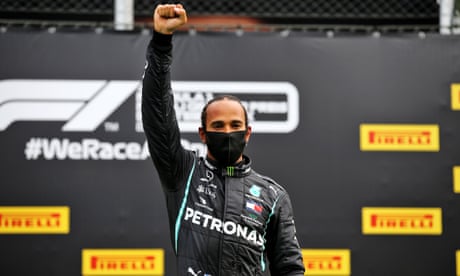 “It just doesn’t seem real to have 90 poles,” he said. “When I was driving into the pitlane I saw 90 out there, I completely forgot I had 89.

“I have been living my dream since I have been in F1 and I still am today. It just doesn’t seem real but I have to remind myself that I have to still deliver. I cannot just show up, they won’t climb up on their own.”

READ ALSO:   Tokyo 2020: Finally,Nigeria to get a medal as Oborodudu reaches wrestling final

Hamilton delivered with two flawless runs in the final session. He set a time of 1min 13.613sec, three-tenths up on his teammate, Valtteri Bottas, and a second clear of the rest of the field.

On his second run it was a straight fight between them and once more Hamilton had the edge. He put in a lap that looked better through every sector, setting a track record of 1:13.447.

Bottas in second was a tenth down and the Racing Point drivers, Lance Stroll and Sergio Pérez, almost a full second behind in third and fourth.

It was Racing Point’s performance that brought home the current strength of Mercedes. The Racing Point car is controversially copied from the 2019 championship-winning Mercedes and powered by the team’s engines. Three races in, not only is the Silver Arrows’ power unit the class of the field but their cars – this year’s and last year’s – look to be in a league of their own. Mercedes had already proved how strong their car was through the quicker corners of Austria, but their performance on the predominantly medium and slow corners indicates they have strengths across the board.

Racing Point, too, have made a giant leap. Last year, they were 17th and 19th on the grid at the Hungaroring. Stroll’s time on Saturday was two-tenths faster than Mercedes’s best time in qualifying there in 2019.

Unsurprisingly, the rest of the midfield are unhappy at this state of affairs and Renault have already issued a protest against what has been dubbed the “pink Mercedes”. An investigation into the legality or otherwise of the car’s brake ducts is under way.

For now they will race on and while the car is not badged as Mercedes, the marque may bring what could be considered their first 1-2-3-4 victory since Stirling Moss led Juan Manuel Fangio, Karl Kling and Piero Taruffi to seal the top four for the works team at the British Grand Prix at Aintree in 1955.

Ferrari showed an improvement on recent form, Sebastian Vettel and Charles Leclerc were in fifth and sixth place, respectively, 1.3sec and 1.4sec behind Hamilton.

Red Bull have struggled for balance and stability all weekend and endured a disappointing qualifying, Max Verstappen finishing in seventh and Alexander Albon went out in Q2 in 13th.

Hamilton dismissed suggestions that he or the team were giving anything but their all. “We are performing at the absolute maximum of our capabilities,” he said.

“Yes we have a fast car but we are on the ragged edge of that car, we are throwing that thing around, that’s what we are going to continue to do.”