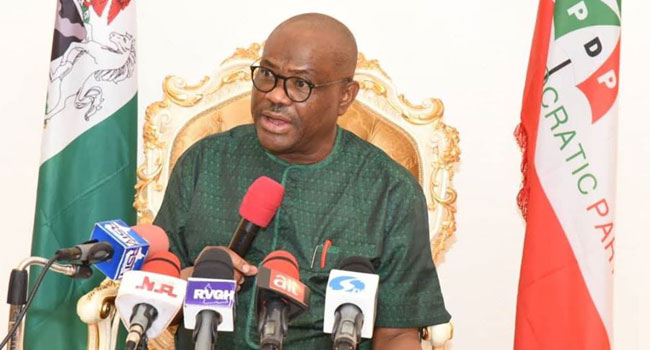 Governor, Nyesom Wike of Rivers State has declared that no part of the state will undergo any form of renaming.

Wike made the declaration on Friday at the Government House in Port Harcourt when he received a delegation of Tiv people living in Rivers State under the auspices of Mdzough U. Tiv led by Mr. Caleb Yashi.

The Governor’s declaration appears to be a parting swipe at the Indigenous Peoples of Biafra (IPOB) whose activities in the state in recent weeks have engendered tension.

The Governor called on Tiv people to continue to  to go about their business peacefully and live with people of their host communities in harmony.

Wike noted that the Tivs have not caused any trouble in Rivers State even though they are warriors, and very strong.

“Rivers State is a place that is very accommodating. We accept everybody to stay with us peacefully. It is only those who want to rename Rivers State that I have said, I will not agree.

“Nobody can rename Rivers State. As per living peacefully, we have good relationship with all ethnic nationalities that live in Rivers State.”