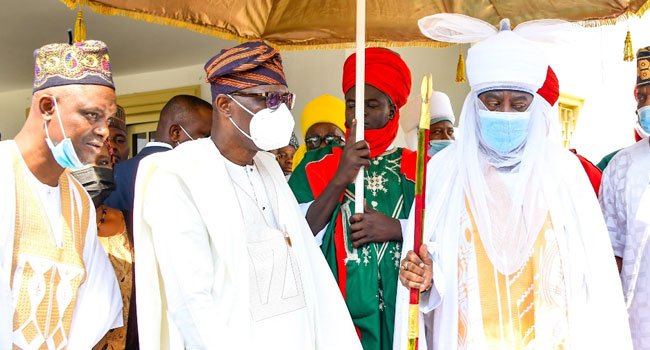 Emir of Kano, Aminu Ado Bayero, on Sunday, visited Lagos State Governor Babajide Sanwo-Olu to commiserate with him over the violence and destruction that characterised the aftermath olof the #EndSARS protest.

Addressing reporters after a closed door meeting with the governor, the revered monarch said the visit became imperative in light of the recent developments in the state.

He said the long relationship between Lagos and Kano states could not be overemphasised, adding that Kano shares the burden and feel the impact of happenings in Lagos.

He reiterated Kano state government commitment to continue to build an enduring and lasting relationship with the state.

The governor, who congratulated the duo of Abiru and Saheed in a statement, said that the victory is a proof that APC is accepted by Lagosians.

He said the emergence of Abiru as the senator-elect and Saheed as the lawmaker-elect was a victory for all, adding that the party was about good governance.