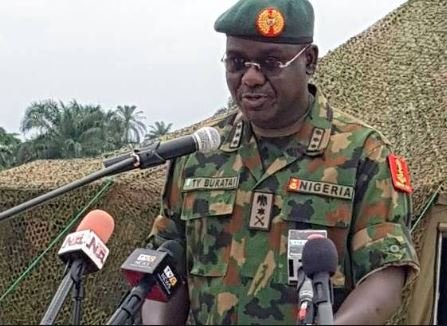 Tukur Buratai, chief of army staff, says move by the International Criminal Court (ICC) to probe activities and operations of the Nigerian military is capable of dampening the resolve of troops in the front line of war against insurgency in the north eastern part of the country.

Citynews Nigeria recalls that Fatou Bensouda, ICC prosecutor, had on Friday called for a formal inquiry into war crimes and crimes against humanity allegedly committed by the Nigerian military fighting Boko Haram in the north-east.

She said although “the vast majority of criminality within the situation is attributable to non-state actors”, preliminary findings showed “reasonable basis to believe that members of the Nigerian Security Forces (NSF)” had committed crimes.

But in a statement on Saturday, Buratai implored the troops to ignore the impending ICC probe, urging them to concentrate on the war against terrorism and the imminent annihilation of Boko Haram insurgents

Buratai described the probe as a “wicked and unnecessary distraction” which he said is capable of eroding the inroads and progress made by the country’s internal security.

“There is no doubt such statement and instigation can distract the Nigerian Army troops with its demoralising effects. It will have negative consequences on troops morale, interest in military service by Nigerians and severe setback to all our internal security operations in the country,” the statement reads.

“However, the Chief of Army Staff (COAS), Lieutenant General TY Buratai, enjoins Nigerian Army troops to ignore the distractions and call on the gallant troops never to be worried or demoralised by these moves.

“He further enjoined troops to ignore the wicked, unnecessary distractions and directs troops to fully concentrate on the final defeat of Boko Haram/ISWAP terrorists group which is in sight.”

Long before the ICC’s findings, the Nigerian army has on many occasions been Indicted of various forms of human rights violations by international bodies, chief of which is Amnesty International.

However, anytime such horrendous allegations are levelled against the army, they are denied, with an insistence that its decade-long fight against Boko Haram insurgents is in line with global rule of engagements and international best practices.