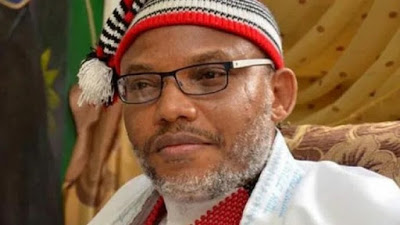 Self-acclaimed leader of the Indigenous People of Biafra (IPOB), Nnamdi Kanu, has launched a regional security outfit in the South Eastern part of the country.

Kanu announced the launching of the Eastern Security Network (ESN) in a statement signed by IPOB’s spokesman, Emma Powerful. on Sunday.

Citynews Nigeria  Kanu said the establishment of a regional security network had become imperative in view of the pervasive insecurity in the country.

He disclosed that the ESN was launched to protect the Southeast from  Fulani herdsmen and other criminal elements.

The fugitive IPOB leader noted that the ESN was similar from Amotekun in the Southwest and Miyetti Allah in the North.

He read riot act to armed robbers, kidnappers, asking them to leave the Southeast or be prepared “for the worst.”

While bemoaning the incursion of terrorists the south east, Kanu promised that the new security outfit will adequately defend the Southeast..

The statement reads partly: “We the global family of the Indigenous People of Biafra (IPOB) under the command and leadership of our great leader, Mazi Nnamdi Kanu, wish to announce with delight, that IPOB has floated a special security network to guard and protect the whole of Biafraland from Fulani herdsmen terrorists and other criminal groups.

“The sole aim of this newly formed Security outfit known as Eastern Security Network (ESN), is to halt every criminal activity and terrorists attack in Biafraland.

“This outfit which is a vigilante group like the Amotekun in the South West and the Miyetti Allah security outfit will ensure the safety of our forests and farm lands which terrorists have converted into slaughter grounds and raping fields.”

READ ALSO:   T.B. Joshua Healed COVID-19 Couple in US, Others Via Video Calls on Emmanuel TV