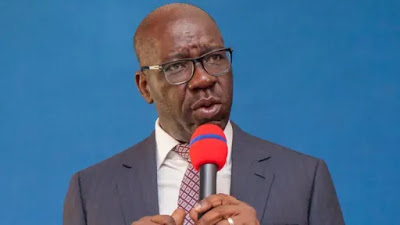 A federal high court in Abuja says it can’t override the appeal court in a case of alleged forgery involving Godwin Obaseki, governor of Edo state.

Citynews Nigeria reports that sequel to this pronouncement by the lower Court is the order granting an indefinite suspension of the case pending the outcome of  stay of proceedings filed at the appellate court.

The All Progressives Congress (APC) and one Williams Edobor a chieftain of the party, had instituted a legal action against Obaseki.

The plaintiff accused the governor of forging the first degree certificate which he submitted to the Independent National Electoral Commission (INEC) to enable him contest the election.

At the last hearing of the litigation, Obaseki through Ken Mozia, his counsel, had prayed the court to adjourn the case Indefinitely as there is a subsisting application before the court of appeal.

In the appeal with suit number CA/ABJ/CV/1072/2020, filed before the appeal court in Abuja, Obaseki challenged the refusal of Ahmed Mohammed, judge of the federal high court, to strike out some paragraphs in APC reply to his affidavit.

Obaseki also filed an application before the court appeal to stay of further proceedings of the trial court.

Challenging the application, Akin Olujimi, APC counsel, implored the court to strike out the motion on the grounds that it is a pre-election matter bound by time.

The senior counsel argued that the court has jurisdiction to proceed with the case as it has a life span of 180 days which would terminate on January 9, 2021.

“This court is bound to continue with the hearing since the suit is sui generis (its unique). Nothing shall be done to clog the smooth wheel of proceedings in a suit of this nature especially in line with fourth Alteration Act,” he said.

Olujimi said the appeal is interlocutory in nature and cannot stop proceedings of the court.

In his ruling on Tuesday, the judge said the rules and extant laws guiding the operations and activities of courts in relating with one another in view of case execution are clear and unambiguous, adding that the high court can’t afford to be on collision course with the appellate court.

He noted that it would be inappropriate to proceed with the suit considering the application for stay pending at the court of appeal.

“What would be the meaning of the trial court’s action? The answer is not far fetched and that is it does not care about whatever decision the appellate court would take in relations to whether it grants stay of further proceedings or not,” the judge held.

“While this uncertainty lasts, it is better and appropriate to tarry a while to allow the appellate court to carry out its jurisdiction on whether or not it should grant stay of further proceedings

“Furthermore, it is the law as established by both the court of appeal and the supreme court that where a lower court is aware of an application for stay of either execution or proceedings, it would be wrong to ignore such application and proceed to hear the suit.

“This suit is hereby adjourned sine die to await the decision of the first defendant’s application for stay of further proceedings.”