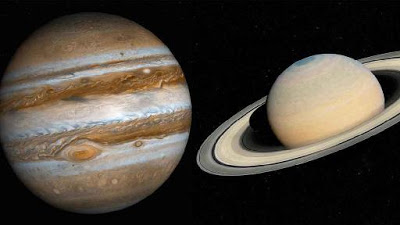 Jupiter and Saturn, the two largest planets in the solar system, will appear side by side in the sky Monday night for the first time in almost 800 years.

The titanic planets “will appear just a tenth of a degree apart,” which is equivalent to the thickness of a dime, according to NASA.

NASA added that sky watchers could get a glimpse of the two planets and their moons through binoculars or a small telescope.

The event, called the “Great Conjuncture” will occur on the winter solstice, the longest night of the year.

The last time Jupiter and Saturn had such a close pairing was in July 1623.