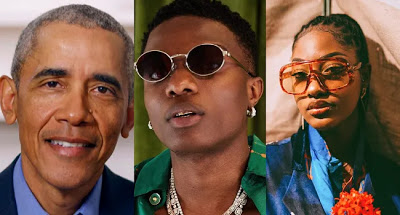 Nigerian artistes Wizkid and Tems have made former US President Barack Obama’s list of ‘Favourite Music of 2020’.

In listing his favourite songs for this year, Obama is continuing an annual tradition.

In 2019, Grammy nominee Burna Boy and Mavin Records’ star Rema made the list with “Anybody” and “Iron man” respectively.

But the former Commander in Chief’s Nigerian pick for 2020 is Essence, a single from Wizkid’s “Made In Lagos” album in which he features Tems.

According to Obama’s list, the former president has a diversified taste, listening to music from various genres, such as pop, R&B, hip-hop, música urban and country music.

The list which was shared on Twitter, according to Obama is complied with “valuable consultation from our family music guru, Sasha” who seems to have a considerable influence on her famous father’s music choices.

See the full list of Barack Obama’s favorite music of 2020 below:

LOVE IS THE KING – Jeff Tweedy

CAN’T DO MUCH- Waxahatchee

THE CLIMB BACK – J. cole

REMEMBER WHERE YOU ARE- Jessie Ware