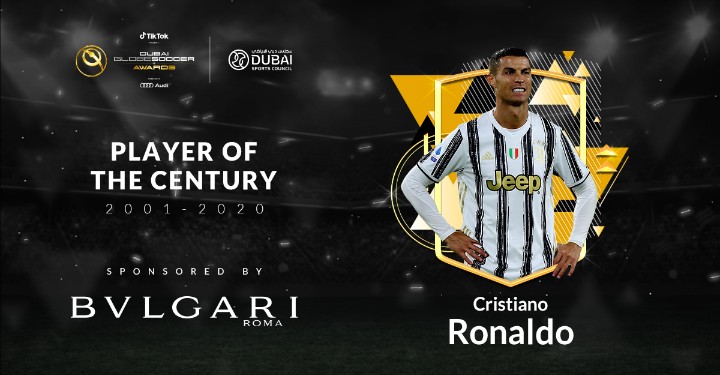 Cristiano Ronaldo beats Leo Messi and Mohamed Salah to win the Globe Soccer Awards’ Player of the Century, while Bayern Munich’s Hans Flick has won the Coach of the Year award ahead of Gian Piero Gasperini.

The Juventus forward, a five-time Balon d’or winner, smiled on stage in Dubai as he was named the greatest football player from 2001 to 2020.

His latest trophy follows a successful for few weeks for the Portuguese talisman, after he was awarded the Golden Foot award, which was first introduced in 2003, for players aged 28 or above and can only be won by a recipient once in their career.

Despite only being 20 years into the current century, Ronaldo was not the only individual to be celebrated with an award spanning across the 100-year period.

Manchester City boss Pep Guardiola won the coach of the century award, following his emphatic reigns in charge of Barcelona and Bayern Munich before his move to the Premier League.

Meanwhile, Ronaldo’s agent Jorge Mendes picked up one of the stranger accolades of the ceremony, with the agent of the century trophy.

Ronaldo’s former club Real Madrid were labelled as the club of the century, after winning five Champions League titles and seven LaLiga’s during the last 20 years.

Other award winners at the ceremony included Champions League winners Bayern Munich, who won the club of the year award for 2020.

The 35-year-old Ronaldo has shown no signs of ageing after he scored a huge 44 goals for club and country in 2020.

Ronaldo’s rival Lionel Messi, who was snubbed at the awards ceremony, fell short of the pair with just 26 goals for Barcelona and Argentina this year.

The Old Lady’s frontman has also been making a mark on a more domestic level, after he became just the fourth player in Serie A history to score at least 33 goals in a calendar year after finding the net twice against Parma on December 19.
Ronaldo scored once in each half to see Juventus win 4-0 and move level on points with Inter and one adrift of leaders AC Milan.

Ronaldo’s contribution has equalled that of former Juventus forward Omar Sivori from 1961 – who scored the joint-third most goals in a single year behind Gunnar Nordahl in 1950 and Felice Borel in 1933.

Lewandowski wins the 2020 Globe Soccer Player of the Year award

Bayern win the 2020 Globe Soccer Club of the Year

Hansi Flick wins the 2020 Globe Soccer Coach of the Year