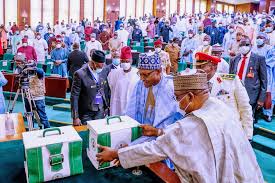 The National Assembly on Monday transmitted the 2021 Appropriation Bill of N13.5tn to Nigeria President, Muhammadu Buhari.

The development was disclosed by the Senior Special Assistant to the President on National Assembly Matter, Senator Babajide Omoworare, in a text message to Punch.

Omoworare said, “The Appropriation Bill has been transmitted by the National Assembly to Mr President in conformity with the provision of Section 59 of the constitution. The bill is presently being looked at by Mr President and consequent action will be taken in due course.”

Recall that the House of Representatives and the Senate last Monday approved the budget during an emergency session.

The passed budget Bill by the National Assembly also provided the sum of N3.3tn for debt servicing.

The National Assembly thereafter adjourned its sittings until the 26th of January, 2021.