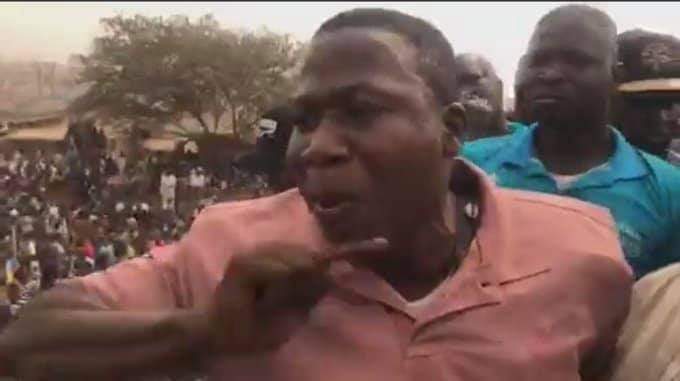 Igboho says his fight against herdsmen is not a ploy to gain cheap popularity or enrich himself.

Yoruba activist, Sunday Adeyemo well known as Sunday Igboho has explained why he wants herdsmen out of his native home in Ibarapaland, Oyo state.

After issuing a seven-day ultimatum to the Fulani to leave the state, Igboho on Friday, January 22, 2021, after addressing Igangan youths stormed the Fulani communities in the ancient town to eject Seriki Fulani, Salihu Abdukadir and herdsmen accused of perpetrating crimes in the town.

Explaining the reason he issued the eviction notice, Igboho in an interview published by Punch said, herdsmen have killed many sons and daughters of Ibarapa and Oke-Ogun area of Oyo State including prominent ones with no arrest made.

He added that the residents of the areas are no longer safe in their land.

Igboho said, “The reason for that was the incessant attacks on our people in the Ibarapa and Oke Ogun areas of the (Oyo) state. Our people are no longer safe in their own land. On the contrary, Yoruba people don’t engage in such atrocious things. You cannot see a Yoruba man going about killing people in Kano. In the North, they can behead a Yoruba man for slapping a Hausa/Fulani not to talk of destroying their farmlands. You will recall the case of ‘Oko Oloyun’ ( a popular herbal medicine practitioner) who was killed during a visit to his country house. He was killed at Igbo Ora.

“Government said they would unravel the facts behind his killing but till now, the matter has not been unravelled. That killing would clock up a year this month. Another illustrious son, Dr Fatai Aborode, returned from overseas and cultivated a farmland in Igangan. He employed about 300 people. When his farm was plundered by cattle, he lodged a complaint with the Seriki Fulani. Few days after, killer herdsmen kidnapped him, tied him and butchered him. Nothing was done and no arrest was made.”

The activist, however, denied the claim that his fight against herdsmen is a ploy to gain cheap popularity and enrich himself.

He said he is a contented rich man, who does not need any favour from government.

“Some people alleged that I’m doing this to gain cheap popularity, far from it. Some even said perhaps I’m trying to do it to enrich myself, but that is not also correct. The fact is that I am a rich man. I am not seeking favour from government because I’m a contented person. I don’t need money or favour from government, but I am from Ibarapa.

Before now, during hot weather, we used to lay our mats and sleep outside the house or in the courtyards without any fear. In those days, we sometimes returned from farm around 1am without any molestation or fear of possible attacks. But things have changed. People no longer feel safe. Those in government need to know that without the citizens there would be no government,” he said.

Advertisement
READ ALSO:   Tokyo Olympics 2021 Tickets To Be Refunded: What To Do If You Already Bought A Ticket

He said he told the Fulani leader in the area that the people of Ibarapa could no longer “cohabit with him and his people because he is a betrayer”.

He also said the fight is not against Hausa/Fulani people, adding that he has many of them as friends at Sabo, Ibadan.