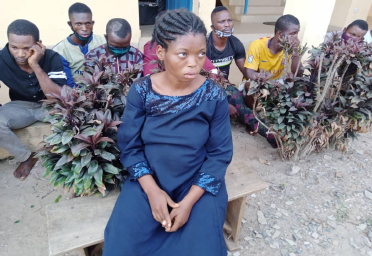 Husband of killer wife, Abdulwasiu Musa, explained how envy made his wife to kill his son.

It was discovered that before the unfortunate incident, the family was living harmoniously as Mariam, who is a senior wife, hails from Benin in Edo State to participate in the younger wife’s graduation ceremony after completing her apprenticeship in hairdressing.

On the said day, Mariam, her younger wife and their husband were all in their respective rooms when she decided to take laws into her hand and feed her step-son with herbicide.

According to her husband, four of us were at home when the incident happened.

In Musa words, “Roqeeb came into the room and told me his stepmother, Mariam gave him drinks to take but I never suspected any foul play until later when the boy fell sick.

“Having seen the suffering the little boy was subjected to; she called me and confessed that the drink she gave him was poisonous as it contained herbicides.

“I never thought she could do that, she is based in Benin, Edo State where she was doing her business and she came all the way from there to participate in her younger wife’s graduation ceremony.

“She always plays with the boy so, there was no way one could have suspected she could poison him until she confessed to it.

“I don’t think I treated her differently, she is not based here in Ede, but she has her own room in the house; and I also discharge my responsibility to her whenever she is around. I did not abandon her, she is even pregnant.”

Meanwhile, Mariam during an interview with journalists, while she was being paraded by the police, she explained that she was pushed to the act by her hot temperament and the way her husband treated her.

The 24-year-old pregnant woman said her husband abandoned her for another woman after she lost her first child. Mariam added that her husband even stopped caring for her; hence, she became very jealous.

According to her, “Jealousy and bad temperament led me to commit the evil act. My husband’s attitude towards me in the house, his preference of the male child, that the second wife had for him, over others and the love that my husband had shown the second wife, led me to the act.

“The boy did not offend me; something just came over me when he came into my room. I drew him closer and gave him the drink, already mixed with herbicide. It was while they took him to the hospital that I felt bad and told my husband what happened.

“I am also pleading for mercy. I seek everybody’s forgiveness. It was a mistake and I promise that such won’t repeat itself,” she said.