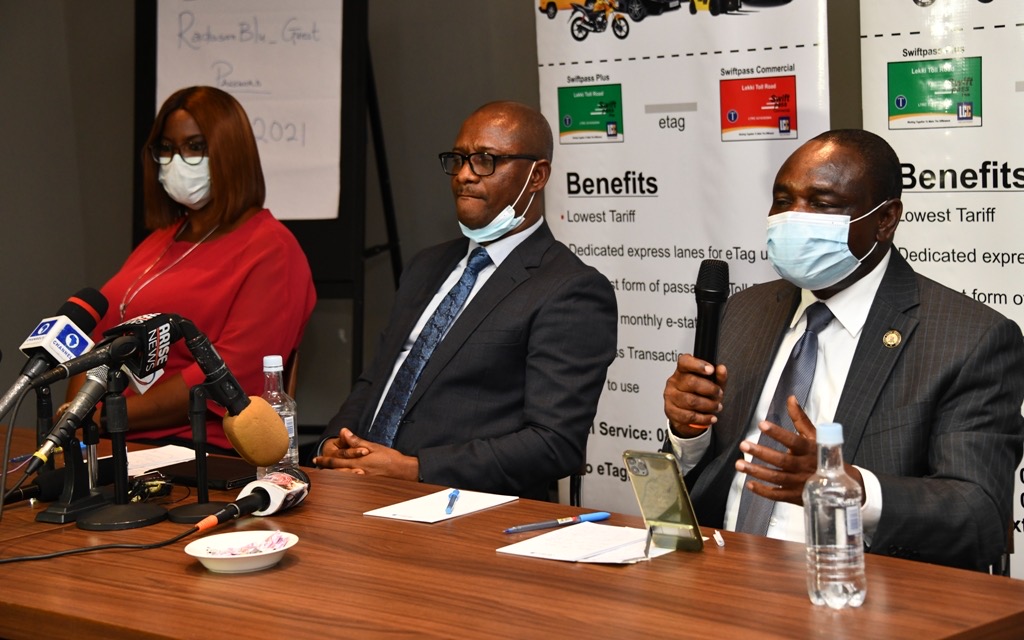 The Lekki Concession Company (LCC) has again appealed for the understanding of aggrieved youths who are bent on preventing the Company from commencing the evaluation of the extent of the damage done to its assets on the night of Tuesday, October 20, 2020, citing the subsisting bank debts and the fate of its over 500 workers as compelling reasons the process ought to begin now.

Speaking at a press conference in Lagos on Monday, Managing Director of the LCC, Yomi Omomuwasan expressed regret that some people were using fake news to misinform Nigerians about the company’s ownership and whip up public sentiment against its return to business.

Omomuwasan said while LCC empathises with Nigerians who suffered one loss or the other during the #EndSARS protest, continuing to punish LCC whose facility was forcefully taken over by the protesters for whatever happened on October 20, 2020, would be a regrettable double whammy for the company.

He explained that the non-return of the Company to operation is negatively affecting LCC’s subsisting loan obligations to local and international lenders, maintenance of the road, its ancillary services and most importantly,  the welfare of its staff some of whom have been home since the incident in October.

He disclosed that LCC owed N23.9 billion and $49.6 million to local and foreign lenders as of December 31, 2011. He, however, lamented that the forceful takeover of the Tollgate by #ENDSARS protesters and its subsequent destruction had affected its ability to service its debts.

He said, “As of January 31, 2021, the outstanding debt liability from the local lenders is in the region of N11.6 billion and from the foreign lenders $31.1 million (USD), with the difference being the amount LCC has so far paid the lenders. It is important to say that, before the #ENDSARS protest, LCC had continued to meet up with servicing its loan obligations without default to the lenders.

Advertisement
READ ALSO:   Nigeria is under siege by terrorists, live up to your responsibility - Northern CAN tells Buhari

“However, since the commencement of the #ENDSARS protest, the forceful takeover of the Admiralty Circle Toll Plaza and the unfortunate incident of Tuesday 20, October 2020, we have had to plead for moratorium repeatedly with our local and international lenders. It has been impossible to meet our loan repayment obligations- and obligations to our workers- given our inability to collect tolls, the main revenue source from which the repayment was contractually expected to come.

“Again, this explains where the bulk of our earnings goes, contrary to the false claims on social media that the toll plaza is a cash cow. If we default in payment of these loans, the implications for the business community are too grave to be imagined.”

The MD further explained that contrary to allegations that all the Company does is collect tolls, the LCC renders a host of value-added services. “Daily users of the Eti-Osa-Lekki-Epe Expressway would testify that LCC provides free 24/7 towing services, accident and breakdown recovery, emergency services and 24-hr security patrol along the express road. LCC is solely responsible for the man-power and operational cost of all of these ancillary services at no cost to road users,” he said.

Reacting to the Admiralty Circle Toll Plaza’s alleged designation as a crime scene by the Lagos Judicial Panel of Inquiry and its reported shutdown, Omomuwasan said nothing could be further than the truth.

The Toll Plaza, he explained, was never shut down. “LCC was only asked to leave the Plaza untouched until the completion of the forensic audit instituted by the honourable Panel. It is important to recall also that at no time was the Toll Plaza ever designated ‘a crime scene” by the Panel, as this would have warranted the total stoppage of vehicular movement at that section of the road. On the contrary, vehicular movement has continued unhindered on the road since Wednesday, October 21, 2021,” Omomuwasan said.

The Managing Director further explained that the Panel’s ruling permitted it to access the Toll Plaza, evaluate and assess damages and necessary renovation.  According to Omomuwasan, “Nowhere in the world is a company shut down indefinitely over an enquiry into an incident. We must bear in mind that as a business, we also have hundreds of workers, who have thousands of dependents, to take care of and monthly financial obligations to honour. Besides, evaluation and restoration require time, and further delay can only worsen the Company’s situation as a going concern.”

On allegations that the LCC pays some outdoor advertising companies, the MD said it was a lie and that the opposite is the case. “As part of efforts to open up other streams of income to service our loan obligations and continually maintain the road as done in other climes, LCC partnered with various advertising agencies, who then pay LCC from the revenue they generate from their advertising platforms. It gives us a sense of fulfilment to note that most of these agencies are the new generation advertising agencies owned by young Nigerians.”

“As of December 31 2011, the shareholders of the Company were African Infrastructure Investment Fund (AIIF); Asset and Resources Management Company Ltd (ARM), Larue Projects Company Ltd, Hi-Tech Construction Ltd. However, in December 2014, the Lagos State Government acquired 100% shareholding right in the Company. The shares were accordingly allotted as 75% to the Lagos State Government and 25% to the Public-Private Partnership (PPP) Office. The records are there at the Corporate Affairs Commission (CAC)’ including the regular filing of returns and tax obligations.”

Speaking on the maltreatment of some protesters at Saturday’s protest at the Admiralty Toll Plaza, Lagos State Commissioner for Information and Strategy, Mr Gbenga Omotoso said, Governor Babajide Sanwo-Olu has directed the Lagos State Police Commissioner to fish out the culprit and ensure justice is served in line with the appropriate rules of the Nigerian Police Force.