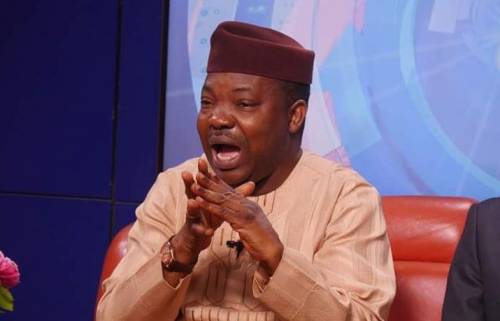 An elder brother of Yinka Odumakin, the late spokesperson of Afenifere, Pastor Jacob Odumakin, on Monday said a prophecy had revealed impending death of the right activist.

Yinka died on Saturday after battling with respiratory problems occasioned by COVID-19 complications.

The senior Odumakin in a chat with our correspondent said prayer sessions were organised to avert the death.

He added that although the unexpected still happened, Yinka’s aged father was consoled by the clerics after he was told of the death, adding that their mother was, however, inconsolable.

“There was a prophecy that we should pray for Yinka so that fresh tree would not fall instead of the dry one. What that means is that our dad, who is 115 years old, is alive and 56-year-old, the last child of our father is gone.”

Pastor Odumakin said the leadership of Afenifere had informed the family that the group would organise the burial of the late activist.

Meanwhile, Great Ife Alumni Association in a statement by the National Publicity Secretary of the association, Mrs Ajibola Falode, said the late Odumakin, would be missed.

Also, a national leader of the All Progressives Congress, Asiwaju Bola Tinubu on Monday visited the widow late Odumakin at the family residence in the Omole area of Lagos.

Tinubu, who visited Dr Joe Okei-Odumakin around 2pm, told her that Yinka was dear to his heart and that his death represented a big loss.

Tinubu later told reporters that Odumakin contributed to constitutional democracy in the country.

He said, “The late Odumakin and I, as well as others, were together during the struggle for the actualisation of June 12, 1993 presidential election won by the late MKO Abiola.”

According to him, even if he and Odumakin later had differences, that was after they had pushed the military out of power.

Yinka’s widow said she believed Yinka  made it to heaven as he was close to God, saying that was her only consolation.

Also, a former governor of Ogun State, Ibikunle Amosun, who was also at the house prayed for Odumakin’s wife, aged parents and the Afenifere family in the condolence register he signed.

“My dear Yinka – What shall we say unto the Lord? All we have to say is thank you, Lord. We thank the good Lord for your short but impactful life. May God almighty grant you eternal rest. And may He console your wife, children, your aged parents, the entire Odumakin and the Afenifere family. Amen – Adieu – Yinka,” Amosun wrote in the register.

Also, Nigeria’s High Commissioner to the United Kingdom, Amb. Sarafadeen Isola, while signing the condolence register, wrote, “Yinka, your worthy legacies remain immortal. The outpouring of condolences, tributes and eulogies are testimonies to your greatness on this planet.”

The Chairman of the Nigerian Communications Commission, Prof. Adeolu Akande, described Odumakin as a selfless man.

Similarly, the Senate Minority Leader, Senator Enyinnaya Abaribe, on Monday in a statement by his Media Adviser, Uchenna Awom, said the death of Odumakin, had depleted the colony of courageous Nigerians who speak truth to power.

He said, “Odumakin’s death is painful. It came at a time his courage and witty mind is highly needed in the country that is fast cascading to a very uncertain destination.”

Likewise, a former spokesperson for Afenifere, Senator Dayo Adeyeye, in his tribute made available in Abuja said Odumakin’s death was a rude shock.

Part of his tribute read, “Yinka was passionate about the Yoruba cause. Having been part of the democratic struggle, he was committed to its survival. He devoted his great intellect and energy to the fight for true federalism and devolution of power. He was an advocate for justice and fairness to all.”

In addition, the Ijaw Youth Council in a statement on Monday by its national spokesman, Mr Ebilade Ekerefe, described Odumakin as an irrepressible vocal Afenifere chieftain whose passing was a setback to the clamour for the restructuring of Nigeria.

Ekerefe noted that Ijaw youths admired Odumakin and drew inspiration from his consistent advocacy for a structured Nigeria that would reflect the principles of equity, fairness and justice.

The IYC official said, “These are the fundamental principles upon which the IYC was founded. It is painful that Nigeria has lost a voice for the voiceless.”

Sequel to the death of Odumakin,  Afenifere, has postponed its monthly meeting scheduled to hold in Akure, Ondo State.

The development was disclosed in a statement by the Assistant General-Secretary of the organisation,  Mr Adeleke Mabinuori.

The statement reads, “I have been directed by the acting leader, Chief Ayo Adebanjo, to inform you that the Afenifere meeting scheduled for Tuesday, 6th of April, 2021, is cancelled.