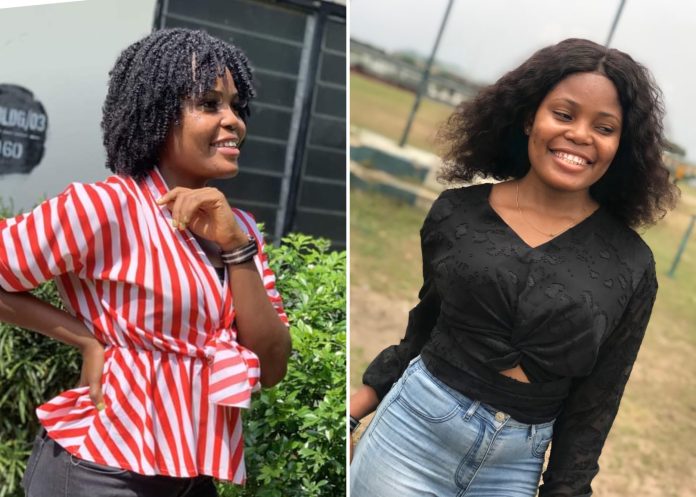 Recently David Hundeyin released an investigative report on the activities of Uduak Akpan, the killer of Iniobong Umoren.

The post below is an excerpt from his report;

For ease of understanding, I ran all the numbers through Truecaller and put the names in brackets next to them
Around 1.17PM on April 29, Frank Akpan placed a call to Hiny Umoren, which lasted for 124 seconds. It is fair to extrapolate that this was a call where he gave directions to her regarding where she should go for the purported interview. At 1.21PM, he then placed a call to a Blessing Godwin, which lasted 147 seconds. Was he chatting up another potential victim of the same job interview snare? It is impossible to say for now.

The said lady @Blessing Godwin has come out to confirm the culprit indeed called her over a job offer.

God has done me well, that is why I don’t want to hide it. I have come to testify publicly to the Glory of God and to the shame of the devil.

I was attending an Affiliate Marketing class on a friend’s WhatsApp status around 7pm. The class has been on for about three days. On that day, he taught us on platforms where affiliate marketing thrive and he made mention of as one of the platforms.

It was actually a link so I clicked on it and it took me to the site. I was still scrolling through when I saw a job opening at an hotel at Delta State. The offer came with a very attractive salary and an accommodation too.

Since, I am unemployed and I was still searching for what do to keep the body and soul together. I applied for the job immediately using my email address. I went back to his status and completed the Affiliate Marketing class for that day.

At 1:21pm, I got a call from a number which is not on my contact list asking if I am Blesky Godwin, I told him yes, that I am Blessing Godwin. He corrected me and told me that when applying for something official, I should use my name and not some unofficial name.

I immediately recalled that I applied for a job using my email the previous day. I told him it appeared that way on his end because I used my email address and that is my email username. He said it was ok.

I told him it wasn’t possible because I was at Ibeno which is quite far from Uyo, he said he knew. I asked if we could reschedule the meeting to another day, and he obliged.

He said I should send my CV to him on WhatsApp and I should save his number as Ezekiel.

After the call ended, I saved his number as “Ezekiel Job” on my phone then I went to forward my CV from my email to WhatsApp but I couldn’t. I told him I couldn’t forward it to WhatsApp that he should send his email address to me so I could send it to his mail which he did and I forwarded my CV to him.

I chatted him up and asked if he had seen it, he said no and then I sent it again and asked him for the second time which he said he has.

After a while, I didn’t hear from him again, so I chatted him up. I typed “Hello” and I told him that he hasn’t said anything since I forwarded the CV to him. He did not reply again. I want to believe that by this time, Ini Umoren must have arrived the venue and he was probably ‘busy’ trying to end her life.

Since that day, I didn’t hear from him again and as God would have it, I totally forgot about him and his secretary job.

On that same day, I had the strong urge to praise God. I didn’t know what for(I’m not saying there has to be a reason before we can praise God). The feeling was so strong. I just went on my WhatsApp and typed…

On the next slide, I typed…

“God why, why are you so mindful of small me?”
“I am undeserving of your love in every meaning of the word undeserving but yet you still choose to love me”.
“Thank you Lord for Loving me the way you do”

READ ALSO:   What Did PDP Do To Deserve The Loyalty Of Igbos? By Fredrick Nwabufo

Sincerely, I felt the urge to worship God, I felt He did something really big for me but I didn’t know what it was.

My friend Fortunate Marvie even had to ask me to share the testimony, of which I told her I didn’t have any yet but she would be the first to know once it happened.

On 11th May 2021, I received a call from a friend asking me if the guy that raped and killed Ini Umoren called me. I was angry and baffled at the same time because I didn’t understand why he would ask me if a murderer called me.

I asked him why he asked that, he said he saw an investigative news report on Facebook that contained my name as one of the persons the Uduak guy called. I asked him if I was the only Blessing Godwin in Nigeria. He asked if I don’t remember receiving any call from someone like that on 29th April.

Slowly, I began remembering that someone invited me for an interview at Airport Road but i wasn’t sure of the date, so I told him it might be him or not. He told me the Uduak guy called me after he spoke to Ini Umoren. He also mentioned the time and the minutes we talked for. Mehnnnnnn I was scared. I told him i would confirm from my call list. We ended the call on a nice note.

At this time, I didn’t remember the name he(the interview guy) gave me, so I randomly scrolled down to my call list till I got to 29th April and I saw Ezekiel job then I remembered he asked me to save his name as Ezekiel.

I was still in shock trying to process all the information when I received a call from another friend of mine that told me to check my messenger that he has dropped a link to a job opening for me, I told him ok and went ahead to check it on messenger. I clicked on the link which led me to Kufre Carter’s timeline.

As I scrolled down, I saw the post which my name was mentioned right under the job opening post. I abandoned the job opening post and read the one that carried my name. It was there I realized that the Uduak guy is the same Ezekiel that called me for the job interview.

Men and brethren I couldn’t help but shed hot tears. My thoughts traveled far and wide. All I did was to imagine what would have become of me if I had gone for the interview.

Then again, I imagined, just maybe, if he had succeeded in raping and killing Ini without the friend raising alarm and his evil being exposed, I would have certainly been the next victim.

He would have probably called me up the next week and i would go because I need a job and that would have been the end of me.

Please if I ever mean anything to do, help me thank God for my life.

Ini Umoren was just an innocent girl looking for a job. She didn’t deserve rape and murder as a reward for her job search. I pray that God grant her family the fortitude to bear this great loss.
Rest in Peace Ini-obong.