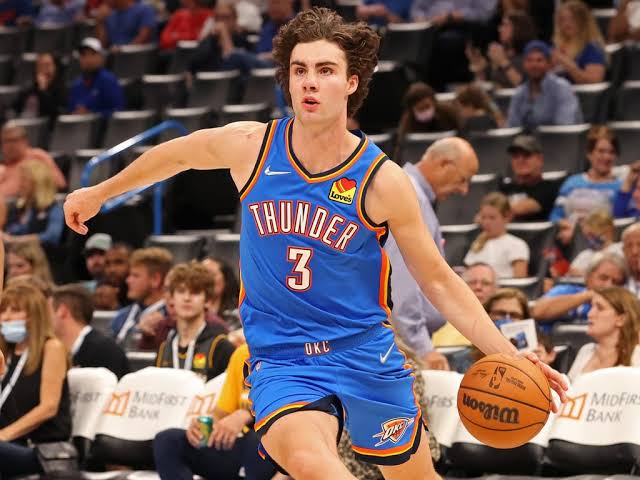 Teenage Australian rookie Josh Giddey has made history as the youngest player to notch a triple-double in the NBA.

Giddey starred with 17 points, 14 assists and 13 rebounds for the Oklahoma City Thunder in a 95-86 home loss to the Dallas Mavericks.

“It’s cool, the individual stats, but a win is always better than individual stats for me. I’ve said if I’m zero-zero-zero and we win I’m happier than if we have a triple-double and we lose,” said Giddey, who started his professional career in Australia’s NBL competition for the Adelaide 36ers.

“Growth comes with experience and learning. I made progress more mentally than physically. I’m learning every game and I’m happy where I’m at.”

Giddey’s feat came in his return after missing three games while in the NBA’s Covid-19 protocols. The Thunder were playing without their leading scorer Shai Gilgeous-Alexander, who entered the protocols on Saturday.

The Mavericks got three key players back after stints in the league’s Covid-19 protocol, including star Luka Dončić, now the fourth-youngest to put up a triple-double after he did it in 2019.

Dončić nearly recorded another, with 14 points, 10 assists and nine rebounds as he helped the Mavs to the win after returning from a 10-day absence due to a knee injury.

The feat continues an exceptional rookie season for Giddey, the sixth overall draft pick, who has had seven double-doubles for his youthful OKC team.

“I’m happy for him and proud of him. He’s a great worker, I get to spend a lot of time with him and he’s a sponge,” said interim Thunder coach Mike Wilks. “Smart for a young player, but young, not even 20 yet, and he’s got a lot of room for growth and improvement. I’m just expecting him to continue to grow and continue to develop.

“He got lost in the competition. We don’t focus on the numbers, he was out there trying to make plays, he was focused on winning as a team, and I give him a lot of credit for doing that. Our guys did a good job on finishing the plays he was able to create.

“He was out there being aggressive, being Josh, and the numbers are just a result of that.”