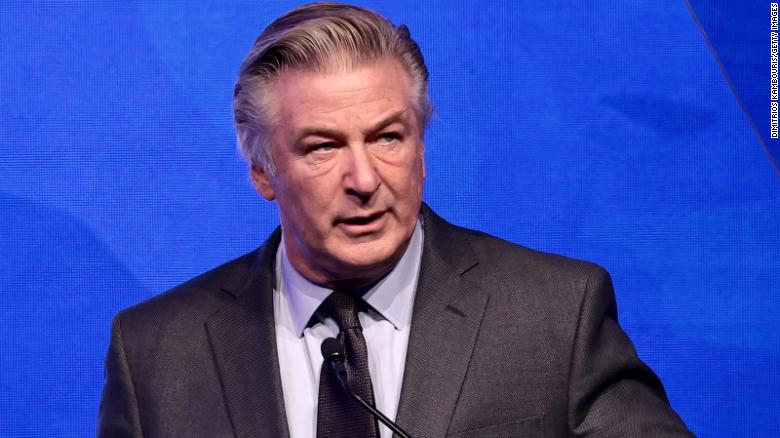 (CNN)Actor Alec Baldwin is being sued for defamation and negligence by the family of a fallen Marine after comments he made about one family member’s presence outside the US Capitol on January 6, 2021, according to a suit filed Monday in the US District Court for the District of Wyoming.

The sisters and widow of Lance Corporal Rylee J. McCollum, who died on August 26, 2021, during the suicide bomber attack in Kabul, Afghanistan, are asking for $25 million plus legal fees after suffering severe distress following Baldwin’s comments, according to the court filing.
After McCollum’s death, a GoFundMe account was started for his widow Jiennah McCollum “and her soon-to-be-born daughter,” the suit says. Baldwin heard about the GoFundMe account and sent a check of $5,000 to the Marine’s sister, Roice McCollum, for Jiennah and her child as what he called “a tribute to a fallen soldier,” according to the suit.
On January 3, Roice “posted a photo of a crowd of demonstrators at the Washington Monument on her Instagram page in anticipation of the January 6, 2022, one-year anniversary of her attendance at the Washington, DC demonstration,” the suit said.
On January 6, 2021, hundreds of supporters of then-President Donald Trump gathered outside the US Capitol to protest Congress certifying the results of the 2020 election. Many rioters pushed aside barricades and law enforcement officers to breach the building, storming some of the most hallowed chambers of American democracy and setting off shock waves of violence and division across the country. The consequences of that day continue to reverberate.
When Baldwin saw Roice’s post ahead of the one-year anniversary, he began to message her on Instagram, according to the lawsuit.
“When I sent the $ for your late brother, out of real respect for his service to this country, I didn’t know you were a January 6th rioter,” Baldwin said, according to the suit.
Roice “was never detained, arrested, charged with or convicted of any crime associated with her attendance at the January 6, 2021, event in Washington, DC,” the lawsuit said.
She responded to Baldwin, according to the suit, that, “Protesting is perfectly legal in the country and I’ve already had my sit down with the FBI. Thanks, have a nice day!”
Baldwin responded, the lawsuit says, with, “I don’t think so. Your activities resulted in the unlawful destruction of government property, the death of a law enforcement officer, an assault on the certification of the presidential election. I reposted your photo. Good luck.”
CNN has reached out to Baldwin’s attorney for comment.
Approximately 20 minutes after Baldwin posted Roice’s “Instagram feed,” she “began to get hostile, aggressive, hateful messages from Baldwin’s followers,” the suit alleges.
Baldwin’s Instagram post that he later deleted said, “Lots of Trumpsters chiming in here with the current cry that the attack on the Capitol was a protest, (a more peaceful form of which got a lot of other protestors imprisoned) and an exercise in democracy. That’s bullsh*t.”
His post continued and said, “I did some research. I found, on IG, that this woman [Roice McCollum] is the brother (sic) of one of the men who was killed,” in Kabul Afghanistan.
“I offered to send her sister-in-law [Jiennah McCollum] some $ as a tribute to her late brother, his widow and their child. Which I did. As a tribute to a fallen soldier. Then I find this. Truth is stranger than fiction,” his post added.
The suit says Baldwin, “unequivocally understood that by forwarding Roice’s Instagram feed to 2.4 million like-minded followers and posting his commentary would result in the onslaught of threats and hatred that it did.”
Hours after Baldwin’s post, Lance’s other sister, Cheyenne, and his widow, Jiennah, began receiving “hateful messages and even death threats,” according to the suit.
“Neither Cheyenne nor Jiennah” were in Washington, DC on January 6, 2021, the suit added.
Jiennah received a message Thursday calling her a “racist” according to one of the family’s attorneys, Dennis Postiglione. Jiennah is Black, Postiglione said in a phone call.
“I gratefully supported the gofundme campaign while simultaneously not knowing the woman I approached is an insurrectionist. I think that’s…remarkable,” Baldwin said, according to the lawsuit.
The lawsuit says that Baldwin is “keenly aware” of the weight of his fame and notoriety. The family is asking for a trial by jury, according to the suit. In addition to negligence and defamation, they are also suing Baldwin for invasion of privacy and intentional infliction of emotional distress.
“[R]egardless of a person’s politics, what Baldwin did here should never be allowed to stand. He is one of the most recognizable people in the country and has a social media following five times the population of the State of Wyoming. He abused that platform willingly and put the McCollum’s through hell at a time when they had just begun to cope with Rylee’s death,” Postiglione said in a news release.
This is not the only legal battle Baldwin is embroiled in.
Last month, the actor turned over his cell phone to law enforcement officials as part of their investigation into the fatal shooting of Halyna Hutchins on the set of the film “Rust,” CNN has previously reported. He is also being sued by crew member Serge Svetnoy for negligence.
Baldwin had previously said he would “never point a gun at anyone and then pull the trigger,” during an interview with ABC’s George Stephanopoulos in December. According to court documents, Baldwin said he believed the gun did not have live rounds in it. His attorney has said Baldwin is cooperating with authorities in the investigation of the fatal shooting.