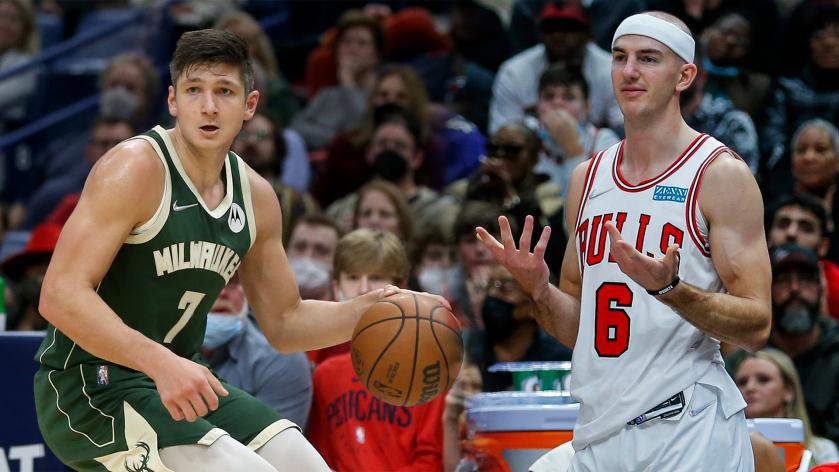 Milwaukee head coach Mike Budenholzer backed Grayson Allen amid a wave of public backlash against the Bucks guard for the Flagrant 2 foul he committed on Alex Caruso during Friday night’s game against the Chicago Bulls.

The foul, which featured Allen pulling Caruso out of the air with both hands on a dunk attempt, led to the Bulls guard falling and fracturing his right wrist, an injury which will require surgery and has a six to eight week re-evaluation timeline.

“It’s something I’ve spent some of the day thinking about. I’m going to visit with Grayson for a lot of reasons, more to just check in on him and see how he’s doing,” Budenholzer told reporters in advance of a matchup against that Allen missed with a sore hip. “I could just go on Grayson since he’s been here, and really since he’s been in the league. I think he’s been great for us. He’s competitive. He does a lot of things that are about winning. Our locker room loves him, I love him.

“Competition is tough and there’s things that happen in the games that are unfortunate. I know that Caruso is gonna miss some time, and I feel for him. I don’t want that for any of our opponents, for anybody. But there’s nothing that was done intentional.

“Grayson’s been nothing but great for us. The way the guys feel about him, that’s how you know the most, is how a locker room feels about you. It’s an unfortunate part of competition, and I hope that the Bulls and he can be back and whole and healthy as soon as possible, and look forward to competing against them again.”

Allen was ejected from the contest, which the Bucks won 94-90. In postgame comments to reporters, Bulls head coach Billy Donovan called on the NBA to consider further punishment for Allen, who Donovan added “has a history” of similar plays. The Bulls organization has made similar appeals behind the scenes.

The league is still reviewing the incident and does take into account any injuries suffered by the offended player when weighing potential discipline. Budenholzer responded “no” when asked if he’d heard anything about a potential suspension for Allen.

“For Alex to be in the air like that, and to take him down like that, he could have ended his career. And he (Allen) has a history of this,” Donovan said. “That, to me, it was really dangerous. And I really hope the league takes a hard look at something like that. Because he could have really, really seriously hurt him…

“For it to even be extended to a Flagrant 2, to be thrown out of the game, clearly the officials must have felt like there was some intent there, the way he yanked him and snapped him to the floor and his head bounced off the floor. Really, really, really dangerous play.”

Though Caruso isn’t likely to be re-evaluated until mid-to-late March, the back-and-forth adds a tense dynamic to the team’s next meeting, in Chicago on March 4.