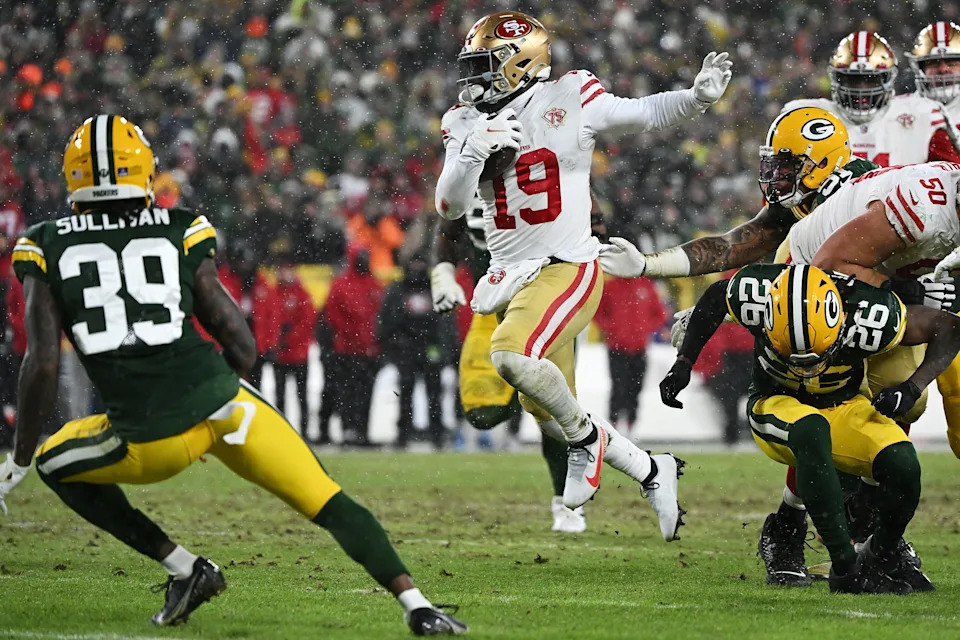 It was snowing and frigid. The Green Bay Packers had just allowed a blocked punt that was returned for a touchdown and tied the game. That special teams fiasco wasn’t Aaron Rodgers‘ fault. And no quarterback could be expected to perform miracles in the winter weather at Lambeau Field.

And yet, this was Rodgers’ legacy on the line in the last 4:41 of the game. The narrative when Rodgers’ career is over, if he doesn’t reach another Super Bowl, won’t be about the Packers’ special teams. It will be about Rodgers having a career that could be the greatest ever, yet making only one Super Bowl.

This is what Rodgers faced in a 10-10 game against the San Francisco 49ers. For all the struggles of the Packers’ offense in the snow, he had a chance to make one drive and put the Packers in the NFC championship game.

After the Packers punted, Jimmy Garoppolo strung together a few completions, Deebo Samuel had an incredible run on third-and-7 to set up Robbie Gould‘s field-goal attempt, and Gould hit it as time expired for a 13-10 win in the NFC divisional round. The 49ers moved on to the NFC championship game, where they’ll play on the road against the Los Angeles Rams or Tampa Bay Buccaneers.

READ ALSO:   Ukraine Invasion: Here are the companies that have taken action against Russia so far

In the immediate aftermath of the shocking loss, a lot of attention will be paid to that blocked punt. In the years that follow, that will melt away and we’ll just remember it as another missed opportunity for Rodgers and the Packers. He’ll likely win another MVP, and not have a playoff win from this season to go alongside it.

The Packers started Saturday night fast. They had a 10-play, 69-yard drive to start the game. A.J. Dillon finished the drive with a touchdown and the Packers led 7-0.

Then the offense stalled. Marcedes Lewis lost a fumble, then there were three punts and a blocked field-goal attempt to end the first half. The Packers led 7-0 at the half because the 49ers did even less on offense, but it was a very uneasy lead. The Packers outplayed the 49ers in the first half and led by just one score.

The second half was much of the same. The 49ers got on the board with a field goal. The Packers answered with a field goal, though they couldn’t punch it in the end zone to give themselves a lead of more than one possession. The Packers’ offense, led by the likely league MVP at quarterback, came up very small in the postseason.

Garoppolo didn’t get a ton of help early on. There were some bad drops by his receivers. But he had nobody to blame but himself on an awful interception deep in Packers territory late in the second quarter. In a cold, low-scoring game, the 49ers couldn’t afford to turn it over in field-goal range.

The 49ers weren’t getting much offense, so the special teams had to get points on the board. Jordan Willis fought through a block and got a hand on a punt. Talanoa Hufanga scooped it up and returned it 6 yards for a touchdown. And despite having practically no offense, with 4:41 the game was tied 10-10. Before the blocked punt, the 49ers were still in the game but it was getting harder to believe the offense could score. They were in the game but not really. The Packers’ defense was playing very well. It seemed Green Bay could escape with a win, scoring just 10 points.

The Packers have had plenty of playoff disappointments since Rodgers’ only Super Bowl at the end of the 2010 season. The moment that blocked punt happened, all the thoughts of those harrowing losses came rushing back.

The Packers defense had a key play in the fourth quarter. With a little more than six minutes left and the 49ers trailing 10-3, the 49ers got enough yards on third down to go for it on fourth-and-1. The 49ers ran it up the middle and Eli Mitchell was stuffed immediately for a loss. The Packers obviously weren’t fooled.

That could have done it. The Packers just needed to run some clock and punt it away. The 49ers weren’t much of a threat to score at that point. But the Packers couldn’t drive it and the punt was blocked and returned for a touchdown.

Rodgers can’t be blamed for the blocked punt. But he’s the likely MVP, and his offense couldn’t put up more points. The Packers couldn’t get a drive going after the fourth-down stop by the defense. And they quickly went three-and-out after the blocked punt. That is on him. The 49ers didn’t need much to set up the game-winning field goal, and they got enough.

Of all the playoff losses that Rodgers will regret when he retires, this one will rank up there. He has plenty to choose from.