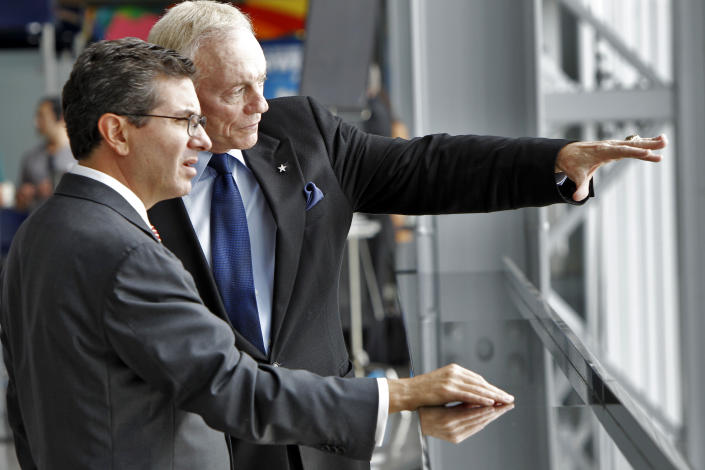 Did the football gods know that with the stock market giving us migraines, the NFL playoff games needed to be extra awesome? We’ll see if the trend continues this weekend when the league’s final four teams take the field.

One thing’s for sure, the NFL is back, baby (as the late Al Davis might have said.) Back from COVID-19. Back from the kneeling controversy. The instant-classic-in-the-snow 49ers-Packers game was the most-watched TV show on a Saturday night in 28 years. And no one’s happier about all this than the 32 owners of the NFL’s teams.

The NFL owners are a fascinating bunch really. Family businesses essentially, they’re mostly all-white, male, of course rich and GOP-friendly — but beyond the homogeneity, each has its own uniquely American story. As we enter the NFL’s high season I wanted to take a look at this group, specifically the four still in the hunt; the Rams, the 49ers, the Chiefs and the Bengals, who turn out to be emblematic.

Forbes, which does a nice job of tracking these franchises, reports the average team is now worth $3.5 billion. Yahoo Finance’s Max Zahn calculates that the overall total net worth of the owners is $154.3 billion, meaning that almost three-fourths of their net worth was from their teams.

That’s quite a chunk of change. We’re used to seeing lists of rich folks whose wealth is primarily in shares of publicly traded companies, i.e Elon, Bezos and Zuck. The NFL owners are a parallel universe of private wealth, and as such are one of greatest under-recognized power centers in our country. They don’t call this America’s most exclusive club for nothing.

Advertisement
READ ALSO:   Breaking: Juventus 'to be RELEGATED to Serie B and STRIPPED of their last Serie A title'

“Pete Rozelle convinced the owners that if they shared revenue and created the ability for teams in smaller markets to be successful, they would supplant baseball as America’s pastime,” says Mark Rosentraub, a sports management professor at the University of Michigan. “He was right and they did it.”

Here then are the final four:

Mike Brown owns the Bengals, the surprise team of the playoffs, which had been known primarily for its futility. The Bengals are a family affair and tied to football royalty. Brown, 86, is the son of legendary Cleveland Browns Coach Paul Brown who founded the Bengals in 1968. Mike played quarterback at Dartmouth and graduated from Harvard law school. He acted as GM for many years until handing off to a group led by daughter Katie Blackburn (who played ice hockey at Big Green) and is married to team VP Troy Blackburn. The team’s recent success has everything to do with wunderkind quarterback Joe Burrow. Interestingly, Brown has long proselytized about how key the quarterback position is.

Clark Hunt, son of legendary Texas businessman Lamar Hunt, owns the Chiefs. Lamar, (son of oil tycoon H.L. Hunt), formed the team as the Dallas Texans in 1960 as part of the American Football League and then moved it to Kansas City three years later. Lamar, who coined the term “Super Bowl,” tried to corner the silver market in the 1970s and 1980s with his brother Nelson Bunker Hunt, which ended badly. Clark, 56, went to SMU where he captained the soccer team and later worked at Goldman Sachs. (Both his wife and daughter won Miss Kansas USA — 28 years apart.) The Chiefs have actually been pretty good since 2013, but beginning in 2018 when Patrick Mahomes stepped in as quarterback, they’ve become an NFL powerhouse, winning the Super Bowl in 2019.

The Rams are owned by Stan Kroenke, who’s married to Ann Walton Kroenke, daughter of the late Bud Walton, Walmart co-founder — along with his higher-profile and wealthier brother — the late Sam Walton. Kroenke, 74, made much of his money building real estate projects near Walmarts. Today he runs Kroenke Sports & Entertainment, which also owns the Denver Nuggets, the Colorado Avalanche and the iconic English soccer team, Arsenal. The Rams played in LA from 1946 until 1994, whereupon they moved to St. Louis. Kroenke took control of the team in 2009 and maneuvered it back to LA in 2016. That upset the city fathers of St. Louis, who sued the NFL and Kroenke. The parties settled last November with the League agreeing to pay St. Louis $790 million, which includes money coming from Kroenke, according to the St. Louis Post-Dispatch. Ouch.

Real estate developer Edward J. DeBartolo Sr. bought the Niners in 1977 for some $13 million and his family — with son Edward J. DeBartolo Jr., 75, running point for many years — has owned the team ever since. The 49ers are now said to be worth some $4 billion. NB: $13 million from 1977 is worth $60 million in today’s dollars, so that’s worked out well. The team won five Super Bowls in 14 years with Joe Montana et al, but less happy was that DeBartolo Jr. got wrapped up in the 1998 corruption case of Edwin Edwards, former governor of Louisiana. DeBartolo pleaded guilty and was fined. (In February 2020, then-President Trump granted him a pardon.) In 2000, DeBartolo turned over the team to his sister Denise DeBartolo York and her husband John. Denise and John’s son, Jed, is the current president.

There’s an irony here these zealots of free enterprise might not appreciate. “Capitalism generally weeds out the weak but things like the NFL operate with a form of socialism, meaning that you can’t get thrown out of the league and if you have a really bad year. We give you a high draft pick so you get back into the picture,” notes Rick Burton, a professor of Sport Management at Syracuse University. “We don’t have 32 major computer companies, but we can have 32 owners. There’s not going to be consolidation in the marketplace — there aren’t going to be market forces that force you out of business.”

Socialism? Hmm. Something to argue about — or not — during halftime.

This article was featured in a Saturday edition of the Morning Brief on January 29, 2022.