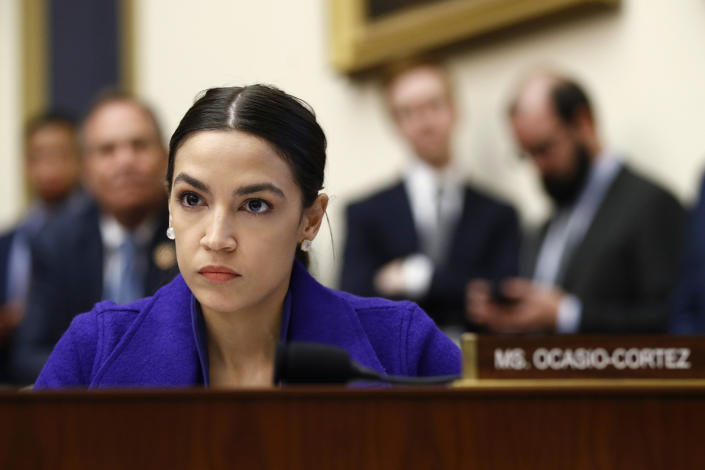 Progressive Congresswoman Alexandria Ocasio-Cortez (D-NY) told Yahoo Finance in an exclusive interview that Facebook (FB) and other U.S. companies have “sabotaged” the global response to COVID-19 by spreading disinformation about the virus.

The tech giant, which recently changed its name to Meta, should “be broken up” because it exploits its overlapping lines of business as a platform, vendor, and advertiser, Ocasio-Cortez added in the wide-ranging remarks.

“There are some things that the United States provides that are welcome,” she says.

“There are also things that we want the United States to stop exporting and one of those things is disinformation — disinformation through U.S.-founded companies like Facebook that have absolutely slowed and frankly sabotaged the global effort to fight against the coronavirus,” she adds.

READ ALSO:   Biafra: Kanu speaks on what ESN will do again in South/East Nigeria

Facebook has drawn criticism throughout the pandemic for what some perceive as an inadequate effort to prevent the spread of false information about the virus. The company did not immediately respond to a request for comment.

President Joe Biden set off a public back-and-forth with Facebook last July when he asserted that social media platforms are “killing people” through the spread of vaccine misinformation.

In response, Facebook VP Guy Rosen refuted the accusation, arguing in a blog post that vaccine acceptance among Facebook users had increased since the previous January and advocating instead for a “whole of society” approach to ending the pandemic.

In later comments on the subject, Biden softened his criticism by directing his ire toward the top influencers who spread vaccine misinformation on social media, rather than the platforms themselves.

But documents later disclosed by whistleblower Frances Haugen revealed that the company had gathered deep information about the spread of coronavirus misinformation on its platform, which the company did not share publicly, the Washington Post reported in October.

Facebook spokesperson Aaron Simpson provided this statement to the Post: “There’s no silver bullet to fighting misinformation, which is why we take a comprehensive approach which includes removing more than 20 million pieces of content that break our covid misinformation policies … connecting more than 2 billion people to reliable information about covid-19 and vaccines, and partnering with independent fact-checkers.”

Only 12 people are responsible for up to 73% of anti-vaccine misinformation on Facebook, according to a report released in March 2021 by advocacy group Center for Countering Digital Hate.

Joseph Mercola, a top anti-vaccine influencer with 1.7 million followers on the platform, frequently posts messages skeptical of vaccines and uses his Facebook page to promote his anti-vaccine book “The Truth About COVID-19.”

Ocasio-Cortez rose to prominence in June 2018 with a surprise upset of incumbent Rep. Joseph Crowley, then the No. 4 Democrat in the House and a potential successor to Speaker Nancy Pelosi. When she took office the following year at the age of 29, she became the youngest woman ever to serve in Congress.

She has amassed nearly 13 million Twitter followers, giving her one of the largest online platforms of a U.S. elected official.

Speaking to Yahoo Finance, Ocasio-Cortez reiterated her longstanding call for antitrust action against Facebook. Last month, a judge rejected Facebook’s request to dismiss an antitrust lawsuit brought by the Federal Trade Commission that claims the company is operating a monopoly in the social media sector.

“Facebook should be broken up,” Ocasio-Cortez says. “They’re an advertiser. They are acting as both platform and vendor. They are a communication platform, which has historically been a well established domain of antitrust.”

“Because they are so many businesses and industries in one,” she adds. “The case [is] right there in and of itself as to why they should be subject to antitrust activity.”