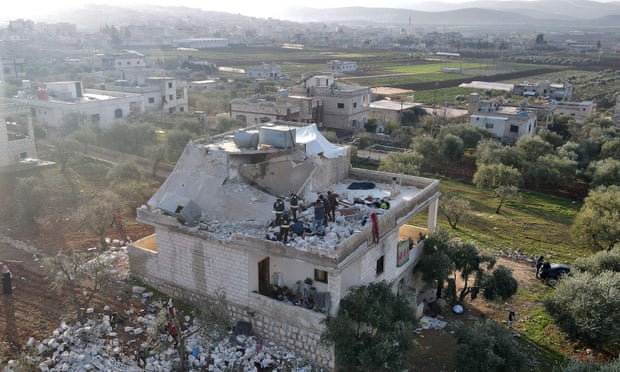 A US special forces raid in north-western Syria early on Thursday killed the top leader of the Islamic State group, Joe Biden has said.

“Thanks to the skill and bravery of our armed forces, we have taken off the battlefield Abu Ibrahim al-Hashimi al-Qurayshi — the leader of Isis,” the US president said in a statement. He said all Americans involved in the operation returned safely. Biden said he would address the American people later Thursday on the raid.

Regional and US officials believe that Qurayshi – one of the world’s most wanted men – directed last month’s spectacular assault on a prison holding Islamic State inmates in eastern Syria.

Earlier the Pentagon said special forces had hunted down high-ranking jihadists in an airborne raid, killing 13 people in a “successful” operation.

The overnight operation was thought to be the biggest of its kind by US forces in the jihadist-controlled Idlib region since the 2019 raid that killed the former Islamic State group leader Abu Bakr al-Baghdadi.

The pre-dawn attack on a house in the village of Atme, just south of the Turkish border, also resulted in the destruction of a US apache helicopter, which had been used to carry special forces troops from Erbil in Iraq.

US forces took remains from the scene for forensic examination.

Medics who attended the aftermath said they found only three bodies. Others are believed to have been taken away by local people. Photographs taken from inside the home appeared to show the impact of a suicide blast. A Pentagon official earlier claimed that some of the civilian casualties had been caused by a detonation from inside the home.

The Syrian Observatory for Human Rights said seven civilians were among the dead, including four children and three women. A Pentagon official claimed that some of the civilian casualties had been caused by a detonation from inside the home.

In Atme the targeted home bore the scars of an intense battle, with torn window frames, charred ceilings and a partly collapsed roof. In some of the rooms, blood was splattered on the walls and the floor, which was littered with foam mattresses and shards from smashed doors.

US special forces have carried out several operations against high-value jihadist targets in the Idlib area in recent months. The area, the last enclave to oppose the government of Bashar al-Assad, is home to more than 3 million people and is dominated by jihadists.

The region is mostly administered by Hayat Tahrir al-Sham (HTS), a group led by former members of al-Qaida’s franchise in Syria. In recent years, HTS has tried to cast itself as a more moderate player focused only on Syrian matters and condemning international terrorism.

HTS has carried out military sweep operations to weed out more radical jihadist groups, such as Hurras al-Din, which has more organic links with al-Qaida.

Atme is home to a huge camp for families displaced by the decade-old conflict and which experts have said is being used by jihadists as a place to hide among civilians.

On 23 October, the US military announced the killing of the senior al-Qaida leader Abdul Hamid al-Matar. “Al-Qaida uses Syria as a safe haven to rebuild, coordinate with external affiliates, and plan external operations,” said central command’s spokesman, the US army’s Maj John Rigsbee in a statement at the time.

Syrian government forces and their main military backer Russia have carried out repeated attacks against jihadist and rebel groups in the Idlib region. However a ceasefire deal brokered almost two years ago by Moscow and Ankara, the two main foreign powers in the area, is still officially in place.

Assad has long insisted his goal was to recapture the whole of Syria, including Idlib province, but the contours of the jihadist-run enclave have remained largely unchanged since early 2020.