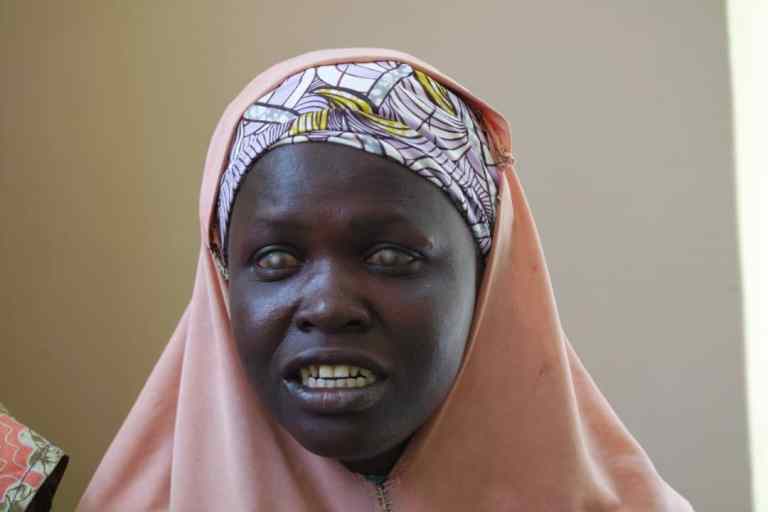 Boko Haram: How a 14 year-old blind girl walk out of Sambisa forest with a stick in Nigeria

It was midnight when Amina Modu and her co-blind friend, Ya Arkwai, crept out of Sassawa, a deadly Boko Haram camp in Northeast Nigeria’s Sambisa forest that had been her home for than three years.

She walked through the deadly forest for several days before she found help. Like the other girls conscripted by the militants, she had been told that she would be hunted down and killed if she deserted.

Amina was just 11 years old when militants invaded her town in Bama, butchering her father, set her home ablazed, abducted hundreds of men and women, and forcing them to become terrorist.

She lost her vision shortly after birth due to lack of proper medical care when growing up in Bama. Like the majority of blind population in Nigeria, Amina and her family lived below the poverty line.

Amina who was currently an Internally Displaced Persons in Dalori IDPs camp in Maiduguri, could still vividly recalled her involuntary marriage to Modu Yarimai, a blind Boko Haram commander of the dreaded terrorist sect at Jodari village, one week after her abduction in 2014.

Being a teenage girl was already difficult enough so imagine also being blind and sexually assulted at the age of 11 by a Boko Haram who abducted you and kill your father, That’s the horrible reality for Amina.

“Many women were forced to have sex with their captors under brutal, inhumane conditions. Many were in agonizing physical pain, pregnancies, sexually transmitted diseases and bleak conditions.

“I was left with no option than to marry him because I had no one else to fall back to,”said Amina, as she recounted her horrific experiance.

“Women who refused to marry members of the sect, were humiliated and beaten while other were strapped with IEDs and sent for suicide mission for the consequencies of thier action.

“Many of the children captured by the terrorist were trained to become fighters. Others serve as spies, scouts, cooks, and bodyguards for officers. Girls are also kept as sex slaves.

“Many of the girls at the camp became pregnant for thier rapist. I did not get pragnant because i was only 11 year-old so i was yet to be matured to have a baby.

“After exactly one month at the camp, life became very tough for us. Thier was food scarcity as the army keep throwing bombs into our camps, forcing us to move from one camp to another for safety.

“Sometimes, we had to move around with my new blind husband to beg for food from other Boko Haram members. They laugh at us. We have passed through many night with empty stomach.

“When our situation became unbearable, Yarimai decided to divorce me. He told me one Friday that he could no longer take care of me. He told me he had perfected plans to escape out of the camp to Michika in Adamawa state.

“Soon after he left, we moved to another camp in Sassawa, Sambisa forest where we spent three years. The Amir’s (Commanders), in the new camp were very deadly and ruthless. They send women aged 7 years-old for suicide mission to Maiduguri and kill people at will.

“Nobody gets in, and nobody gets out alive; thats what our Amir’s always tell us. She said

“But things took a different turn, when i met Bunu Mohammed, a 12 year old, who was kidnapped from Bama. Mohammed spent only 7 months at the camp but witnessed many of his fellow captives murdered for no reason. That was when he decided to risk his life to escape.

“Muhammed help me and Ya’arkwai to escape safely through the forest with the use of the walking stick. After several weeks in the forest without food and water, we finally found ourselves in Bama.

“Shortly after surrendering ourselves to the military, Ya’arkwai died at Bama hospital after short illment. Muhammed and myself got reunited with our families after spending some months at the military detention facility.

“I am currently an IDP at Dalori camp with my Mother and two siblings. Meeting my family, reminds me of the old feelings such as love and empathy. I now attend primary school at the UNICEF school in the camp,”she said.

Amina said she hoped to be an English teacher to impact knowledge to others in the future.

Dilibe Michael is the Editor-in-chief of Metro Times.