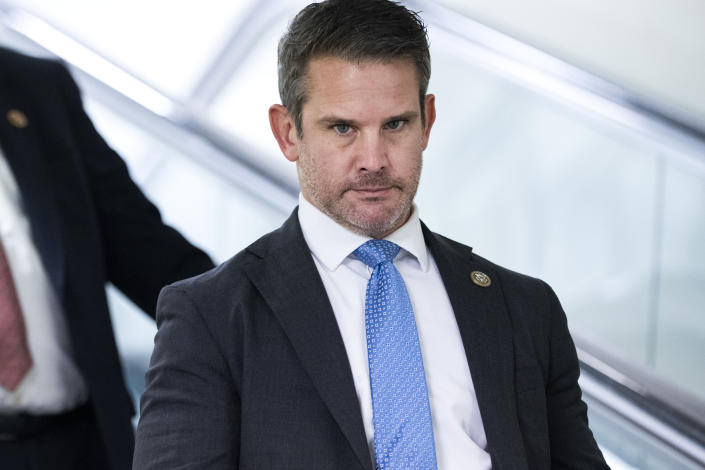 Rep. Adam Kinzinger, R-Ill., was so worried about the potential for violence on Jan. 6, 2021, that he brought a gun to the Capitol that day, a new book about the Republican Party by New York Times reporter Jeremy Peters reveals.

According to the book, “Insurgency: How Republicans Lost Their Party and Got Everything They Ever Wanted,” which was published Tuesday, Kinzinger’s wife wanted to join him at the Capitol to watch the formal certification of Joe Biden’s election victory over Donald Trump. But the Republican congressman told his wife, as well as his staff, to stay home and packed his .38 caliber Ruger LCP pistol before heading to the Capitol.

“I felt a real darkness over the place that I’ve never felt before,” Kinzinger, an Air Force veteran, recalls in the book.

He felt so uneasy about being inside the Capitol building that he decided to return to his office across the street in the Rayburn House Office Building using Capitol Hill’s underground tunnels. He was in his office when the angry mob of Trump supporters breached the Capitol. At 2:18 p.m., Kinzinger, like all 541 members of Congress and their staffs, received an email alert from the Capitol Police instructing them to close, lock and stay away from external doors and windows, and to “remain quiet.”

“Kinzinger barricaded himself inside his office and took out his gun,” Peters writes.

The attack on the Capitol left multiple people dead and more than 140 officers injured. More than 725 people have been charged by the Justice Department.

Kinzinger, who announced he will not seek reelection in November, is one of two Republicans on the House select committee that is investigating the insurrection. Rep. Liz Cheney, R-Wyo., is its vice chair.

On Friday, the Republican National Committee voted to censure Cheney and Kinzinger for their work on the bipartisan panel. The resolution adopted by the RNC also sought to reframe the riot as “legitimate political discourse.”

Both Cheney and Kinzinger blasted the RNC move.

“I’ve been a member of the Republican Party long before Donald Trump entered the field,” Kinzinger said in his statement. “My values and core beliefs remain the same and have not wavered. I’m a conservative who believes in truth, freedom, and upholding the Constitution of the United States.

“Rather than focus their efforts on how to help the American people, my fellow Republicans have chosen to censure two lifelong Members of their party for simply upholding their oaths of office,” Kinzinger continued. “They’ve allowed conspiracies and toxic tribalism to hinder their ability to see clear-eyed. My efforts will continue to be focused on standing up for the truth.”