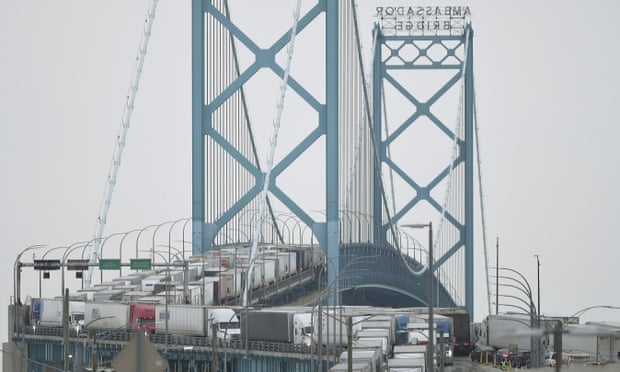 Traffic has ground to a halt at the busiest border crossing in North America, as Canadian truckers and others angry with vaccine mandates spread their protest beyond Ottawa.

Trucks started blocking the Ambassador Bridge linking the cities of Detroit and Windsor late on Monday, closing down traffic in both directions. On Tuesday, entry to Canada remained blocked while US-bound traffic slowed to a crawl. Each day, 8,000 trucks normally cross the bridge, which handles about 27% of trade between Canada and the US. Protesters also targeted another major border crossing in Coutts, Alberta.

Canada’s capital city remained blockaded by hundreds of vehicles from the “freedom convoy” while protest organizers called for a meeting with all federal political leaders – except the prime minister, Justin Trudeau – to find a “peaceful resolution” to the crisis.

Ottawa police said on Tuesday that 23 arrests had been made in relation to the “unlawful demonstrations”.

Ottawa deputy police chief Steve Bell told reporters that police had immobilized many of the heavy vehicles taking part in the blockade.

He said about a quarter of the 418 protest trucks in the downtown area had children in them, and police were concerned for their welfare in relation to cold, noise, carbon monoxide risks and access to sanitation.

On Monday Trudeau repeated his calls for an end to the protest, saying: “Individuals are trying to blockade our economy, our democracy, and our fellow citizens’ daily lives. It has to stop.”

Addressing the House of Commons , the prime minister recognized that “this pandemic has sucked for all Canadians” and that “everyone is tired of having to wear masks and having to follow health restrictions,” but he noted that Canada had one of the highest vaccination rates in the world and implored his compatriots to continue listening to science.

“Those who are shouting at others because they’re wearing a mask do not define what it is to be the majority of Canadians,” he said.

Only around 15% of the country’s truckers are unvaccinated and public health measures have been broadly supported. But the convoy protest has attracted a wide range of support from anti-government and fringe groups.

The federal public safety minister, Marco Mendicino, said that after days of disruption and harassment including loud and persistent horn-honking, Ottawa residents feel like hostages in their own homes. “While everyone believes in the right to free speech, this convoy has crossed the line of acceptable conduct toward fellow Canadians many, many times,” said Mendicino.

He called for unity among parties on applying the rule of law. Several prominent members of the opposition Conservatives have expressed support for the protest.

“There should be no differences across political parties in the way that we are dealing with this moment. It would be a terrible precedent to say that if you show up in the nation’s capital with heavy equipment and blockade the capital city that you can force reckless change in our public policy,” Mendicino said.

On Tuesday, a member of Trudeau’s own party said that protesters had “legitimate concerns” and that the government had erred in its handling of them. “I fear that this politicization of the pandemic risks undermining the public’s trust in our public health institutions,” said the Liberal MP Joel Lightbound.

The federal emergency preparedness minister, Bill Blair – who is the former chief of the Toronto police service – said federal, provincial and municipal leaders were working together to coordinate a response. “It is well past the time to bring this protest to an end,” he said.

On Monday, an Ontario court judge approved an injunction sought by local residents to stop the honking for 10 days. But loud honking could be heard after the judgment was handed down, including from big rig trucks stationed directly in front of parliament.

Tom Marazzo, an acting spokesperson for the convoy, said on Monday that the protesters wanted to go home but would not leave until the “job is done”.

The initial motivation for the convoy was an announcement last year that truckers crossing the US-Canada border would need to be fully vaccinated against Covid-19. But the protesters’ demands have grown to an end for all vaccine mandates, and even the toppling of the Trudeau government.

“I apologize if I’m bashing the guy [Trudeau] but honestly, from my assessment he’s got a .22 caliber mind in a .357 world,” said Marazzo a software developer and former member of the Canadian military.

“Put us at the table with somebody who actually cares about Canada,” he said.

The message from the Ottawa protesters has spread across the country and to the United States, where similar convoys are expected to arise. Late last week, Ottawa police said that the crowdfunding for the Canadian convoy had amassed considerable funding support from US individuals and groups.