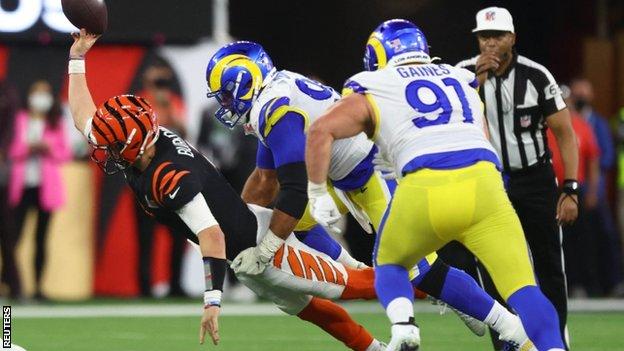 The Los Angeles Rams scored a late touchdown to beat the Cincinnati Bengals 23-20 in Super Bowl 56.

The Bengals looked set to win their first Super Bowl – just two years after being the NFL’s worst team.

But the Rams’ star-studded roster produced when it mattered most, with quarterback Matthew Stafford leading a game-winning 15-play drive.

With just one minute 25 seconds left, Cooper Kupp scored his second touchdown to give the Rams a second NFL title.

Kupp was named the game’s Most Valuable Player, adding to the Offensive Player of the Year award he won last week.

With the game taking place at SoFi Stadium, the Rams are only the second team to win a Super Bowl in their own stadium after the Tampa Bay Buccaneers achieved the feat last year.

Victory also vindicated their decision to return to Los Angeles from St Louis six years ago.

Although they reached the NFL’s championship game at the end of their third season back in California, losing to the New England Patriots, they then traded away a flurry of future draft picks to rebuild their squad.

Built at a cost of $5bn (£3.7bn) by Rams and Arsenal owner Stan Kroenke, the SoFi Stadium earned the right to stage the first Super Bowl in the LA region since 1993 and the Rams went all in to ensure they were part of the big show.

The gamble paid off as they not only reached their fifth Super Bowl but delivered a Hollywood ending.

The Rams gave up significant draft capital to bring in Stafford, linebacker Von Miller and cornerback Jalen Ramsey, while Odell Beckham Jr was picked up as a free agent in November.

Stafford and Beckham, in particular, have enjoyed a new lease of life in LA after being starved of success with the Detroit Lions and New York Giants respectively.

Advertisement
READ ALSO:   Breaking: No Taking A Knee,Raising A Fist At Tokyo Games-IOC

Beckham’s second opened the scoring on the Rams’ second possession of Super Bowl 56, before Stafford made an 11-yard touchdown pass to Kupp to give them a 13-3 lead early in the second quarter.

The Bengals hit straight back to make it 13-10, but on the Rams’ next possession Beckham dropped a catch and immediately clutched his left knee.

The receiver did not return to the game and, after the Bengals went 20-13 up early in the third quarter, the defences took charge.

LA eked out a field goal and, with 6mins 13secs on the clock, Stafford knew this was the time to show the Rams were right to trade Jared Goff and three draft picks for him last March.

With the Super Bowl on the line, the 34-year-old relied on the man he helped to secure the receiving triple crown of most catches, yards and touchdowns in the regular season.

Stafford found Kupp five times on the drive, capped by his third touchdown pass, to put the Rams back in front and finish with 283 passing yards.

Defensive tackle Aaron Donald then made a tackle to stop the Bengals getting a first down before forcing quarterback Joe Burrow to throw the ball away under pressure on fourth and one. The three-time Defensive Player of the Year finished with eight pressures, including two sacks.

Unlike the Rams, Cincinnati used the draft to turn around their fortunes in the past couple of years, selecting Burrow with the first pick in 2020 and receiver Ja’Marr Chase, his former college team-mate, with the fifth pick in 2021.

The Bengals opted for Chase rather than an offensive lineman, which would have given their franchise quarterback greater protection.

Although Cincinnati still have one of the NFL’s most porous offensive lines, Burrow became the first quarterback to reach the Super Bowl after leading the league in times sacked (51).

That was mainly because of his connection with Chase, who claimed a rookie record for receiving yards this season and the Rookie of the Year award.

After leading the Bengals to their first Super Bowl in 33 years, they connected again for 46 yards to set up a successful field-goal attempt late in the first quarter.

When the Rams went 13-3 up, Cincinnati hit straight back with a 12-play scoring drive ending with a trick play, Burrow shovelling it off to running back Joe Mixon to find Tee Higgins for a six-yard touchdown.

Higgins scored again with a huge play from the first play after half-time, although he appeared to pull Ramsey’s facemask before catching Burrow’s deep pass to the sideline and running in a 75-yard score.

An interception on the next play resulted in another field goal to put the Bengals 20-13 up, but then LA began to capitalise on the visitors’ Achilles heel.

The Bengals offensive line allowed Burrow to be sacked seven times as defences forced a run of seven straight punts – four of them by the Bengals – before the Rams ended Cincinnati’s hopes of completing their Cinderella story.

‘Poetic’ win for Stafford and Rams – what they said

Rams head coach Sean McVay: “It feels outstanding. I am so proud of this team. We talk all the time about competitive greatness, about being your best when your best is required and Matt gets to finish it off – it is poetic.

“Those guys did a great job – they took over the game. World champs baby!”

Rams quarterback Matt Stafford: “I just thank the coach for saying ‘you and Cooper Kupp go and get this thing done’, and calling plays for him.

“I kept finding ways to get him the ball, and he kept making unbelievable plays. That is what he does.”

Super Bowl MVP Cooper Kupp: “I’m just so thankful. These guys here, they challenge me, they push me and they make it so much fun coming into work every day.”

Aaron Donald: “I wanted this so bad, I feel amazing. It was one last play to be world champs, and we made a play and won so that’s all that matters.”

Bengals quarterback Joe Burrow (on Twitter): “Sorry we couldn’t get it done. Proud of our team and our fans. Love these guys.”

With five joint headliners, the question hanging over 2022’s hip-hop half-time show was how to do justice to the stars’ sizeable back catalogues.

But Dr Dre, Eminem, Snoop Dogg, Mary J Blige and Kendrick Lamar struck the perfect balance between packing in as many monster hits as possible, while also giving each one – and each other – time to breathe.

And as if five headliners weren’t enough, 50 Cent made his Super Bowl debut by hanging upside down, a recreation of his most famous music video for his most famous song, In Da Club. He might have been a little out of breath, but the crowd went wild.

Curse words were replaced with family-friendly lyrics, and the only thing vaguely approaching controversy came when Eminem took to the stage, taking the knee towards the end of his performance.