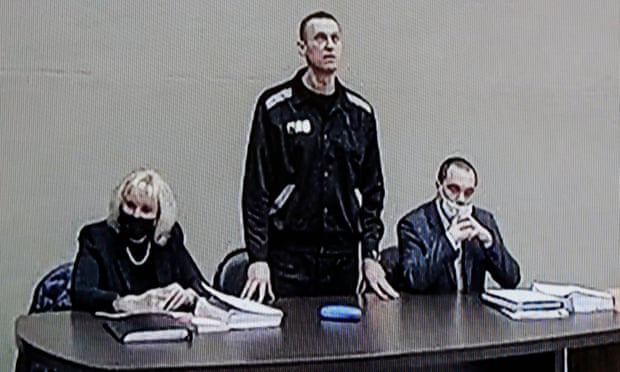 Russia could extend Alexei Navalny’s imprisonment for up to a further decade in a fresh criminal trial that his supporters warn has been overshadowed by the crisis in Ukraine.

The Russian opposition leader is accused of embezzling donations to his FBK anti-corruption organisation, which has accused Vladimir Putin of owning a £1bn mansion and other top officials enriching themselves through corrupt schemes.

Navalny has denied the charges and calls them politically motivated.

The new trial for embezzlement began on Tuesday inside the IK-2 penal colony in Vladimir, an unusual setting three or four hours’ drive east of Moscow, that severely limits the ability of supporters and observers to attend the hearings.

Navalny is serving a three-and-a-half-year sentence at the prison for a separate embezzlement charge. He survived a poisoning attempt on his life in 2020 and was arrested after returning to Russia last year.

His family and supporters say the Kremlin is seeking an easy conviction by holding the trial inside a prison colony far away from his support base in Moscow.

“[The authorities] want to hide him from all people, from his supporters, from journalists,” wrote his wife, Yulia Navalnaya, in an Instagram post on the eve of the trial. “It is so pathetic that they are afraid to hold the trial in Moscow.”

As the hearings began on Tuesday, Navalnaya hugged her husband, who was dressed in a blue prison jumpsuit. Navalny was not held in a cage, as is customary during Russian criminal proceedings, because the courtroom was inside a prison.

Maria Pevchikh, another top Navalny ally, has said the danger to Navalny has increased as public attention has increasingly been diverted away from human rights concerns to the potential for a Russian attack on Ukraine.

“The danger to Navalny’s life, ie the probability of him being killed in prison, will increase exponentially depending on what happens in Ukraine,” she wrote. “The odds are pretty bad already, but a full-on Russian invasion barely leaves him any chance to survive.”

Reporters said those wishing to enter the courtroom were barred from bringing in laptops, phones or recording devices.

Navalny is accused of embezzling donations to his anti-corruption fund, which has spearheaded investigations into government officials and sparked large anti-Putin protests for years. He is also accused of contempt of court for allegedly insulting a judge during a previous trial, where he had been accused of slandering a military veteran.

The government has also sought to disband Navalny’s national political network, opening criminal cases against his top aides and regional coordinators and by declaring his political network as extremist. Many of his closest allies have been forced into exile.

A documentary film about Navalny, who narrowly survived an apparent poisoning attempt with novichok, premiered at the Sundance film festival earlier this year.

The 90-minute film, simply titled Navalny, featured fly-on-the-wall footage of the Russian opposition leader, filmed during the several months he spent in Germany in late 2020 as he recovered from the poisoning. There are interviews with Navalny, his wife, and his closest team.