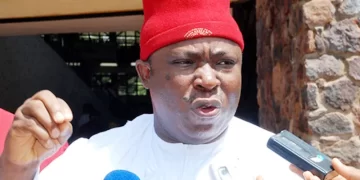 Former National Chairman of the All Progressives Grand Alliance (APGA), Chief Victor Umeh, has said that the continued incarceration of the leader of Indigenous Peoples of Biafra (IPOB), Nnamdi Kanu, by President Muhammadu Buhari led Federal Government is a way of dealing with the entire Igbo nation.

Chief Umeh in a chat with reporters in Onitsha yesterday said he had told Federal Government that the manner they are handling the issue of Kanu is not the best way to the extent that the issue has become too big for Nigeria.

“They treat Nnamdi Kanu issue as a personal thing. It is not. Nnamdi Kanu enjoys the solidarity and sympathy of Igbo people because he is calling for the de-marginalisation of Ndigbo. He wants the equality of citizenship rights for all in Nigeria. Government thinks it is Nnamdi Kanu they are dealing with, not knowing that they are dealing with all of us, the entire Igbo nation” he said.

The former Senator that represented Anambra Central Senatorial zone said if the Federal Government of Nigeria addressed the grievances of the people, things would get better.

“It is pertinent for the Federal Government to realise that they are dealing with the entire Igbo nation and that has become so difficult for them to handle,” he added.

Umeh said the issue of Nnamdi Kanu is a simple thing to handle if they listen to the yearnings of Igbo people to ensure justice in the Nigerian nation.

“If they do it, there will be no problem. Once Government changes his attitudes toward Igbos, we will embrace Nnamdi Kanu and ask him to allow this thing to lie. I know he will do it as he did during the governorship election.”

“When the last Governorship election became so tense, when it became obvious that the election may not take place, they reached out to Nnamdi Kanu who called off the Sit-at-home and ordered that everybody should go to the election. People then became confident and participated in the election.”

The Senator said that the best thing is for the government to realise that they are not using the right approach.

READ ALSO:   Primate Ayodele: APC will implode, Adamu will be controlled by cabals

He said an Umuahia High Court has given the federal government the leeway by stating that Kanu’s arrest was illegal and therefore should be released.
“It is a judgement of a Court. So, it is better for President Buhari to obey the judgment of Umuahia High Court and allow peace to reign in Nigeria and let us move forward as one people.,” he ended.