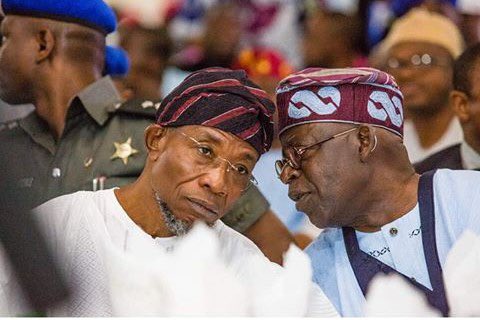 Deji Adeyanju, a popular rights activist, has reacted to the rift between an All Progressives Congress, APC, presidential aspirant, Bola Tinubu, and Rauf Aregbesola, the Minister of Interior.

The rift between Tinubu and Aregbesola was linked to the crisis within the APC in Osun State.

Faulting Tinubu’s involvement in the APC crisis in the state, Aregbesola accused the presidential aspirant of assuming the position of God.

However, the Abuja-based activist said Aregbesola’s demystification of Tinubu was good for people of the southwest and Nigeria in general.

He said: “I commend the courage of Aregbesola for having the guts to dare the so-called political God of the Southwest. Looking at the trajectory of Tinubu, Aregbesola is one of those used to subvert the will of the people in Lagos, especially in the political axis of Iyana Ipaja and other axes over the years. Tinubu eventually installed him as the governor of Osun to further his political dynasty in the Southwest.

“Indeed, there is a political dynasty in the southwest, which is why some of us kick against the presidential aspiration of Tinubu. If you look at the way he operates like a God in Lagos and the other parts of the Southwest, imagine giving such a person presidential power; Nigeria will likely become a one-party state.

“Tinubu is not democratic at all; he imposes his will; imagine he removed a governor because he did not do his bidding and put a narcissist in Lagos. It has always been like that in the majority of the state’s controlled by him in the southwest.

“It will affect his ambition because if you look at the self-indictment by Aregbesola, that they have been the ones who rated him beyond what he deserved to be rated; if you look at that indictment, you will realize that they are the ones who expanded his political reign. So, if people like Aregbesola and some critical stakeholders are against Tinubu, then there is a problem.

“I can tell you for the fact that Tinubu’s Presidency is going to be a jeopardy for people like Aregbesola, Akeredolu, Fayemi, Amosun in Ogun because they would not work for him. The Oyo people may likely work for him because there is no substantive leader there.

“It is always a joy to see the demystification of the so-called political God, just like Aregbesola said, “indeed there is no God except the Almighty,” and you know when people begin to ascribe to himself power meant for the almighty God; then they are setting themselves up for defeat.

“During the last election, this man went to Osun and was openly boasting before the Kabiyesi that he is richer than Osun; what is in Osun? I totally agree with Aregbesola on the issue he raised that Tinubu is equating himself to a political god in the southwest.”