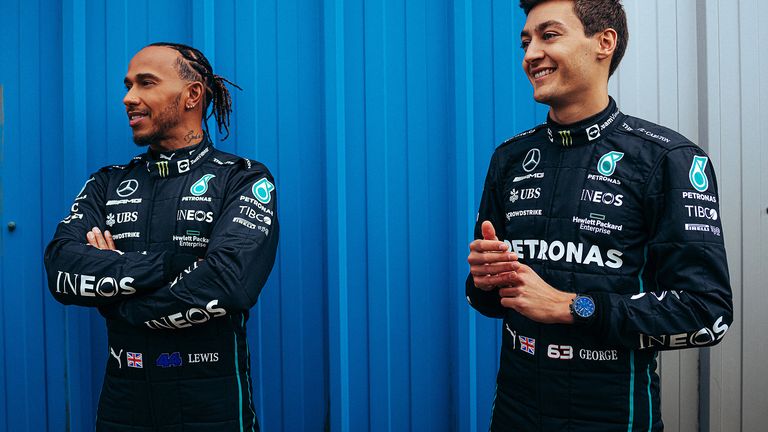 Mercedes have revealed the new-look car they hope will leave the controversy of Abu Dhabi behind and continue a record-breaking F1 title streak, with Lewis Hamilton confirming he is racing in 2022 after a “difficult time”.

Launching their W13 a day after the FIA made the first changes from their inquiry into last season’s Abu Dhabi decider with Michael Masi removed as race director, Mercedes have pledged to “move on” from the dramatic events that saw Hamilton cruelly beaten by Max Verstappen to the championship.

Hamilton was alongside his new British team-mate George Russell, 13 years his junior, as Mercedes unveiled their new car and new colours.

Returning to tradition after two years in a black livery, the Silver Arrows are back in silver and teal with a dash of red for 2022, with the revolutionary new rules giving them a fresh challenge in their bid to continue their unprecedented streak of eight constructors’ titles.

They completed a Silverstone shakedown later on Friday in the car although, due to the adverse weather, significant running was impossible.

Hamilton’s presence at the launch marked his first media interview since leaving the paddock dejected on December 12, and amid a period of silence there were fears a “disillusioned” seven-time world champion would quit the sport.

“I never ever said I was going to stop,” insisted Hamilton, 37, on Friday. “I love doing what I do and it is such a privilege working with this large group of people. There’s no feeling quite like it.

“It was obviously a difficult time for me. It was when I needed to take a step back, focus on being present, so I had my family all around me and creating great moments. 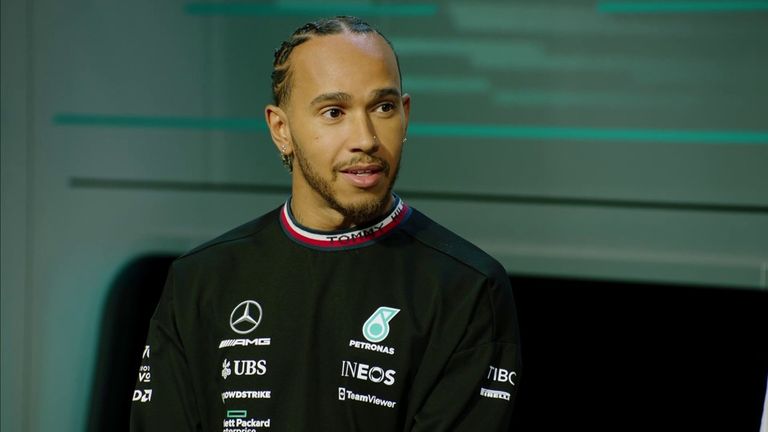 Lewis Hamilton says it was a ‘difficult time’ and that he needed to step back after the season finale in Abu Dhabi.

“It eventually got to the point where I would be attacking again coming into another season. It is exciting seeing George coming in and seeing his energy.”

Hamilton, who with Russell forms the first British F1 driver line-up since him and Jenson Button at McLaren 10 years ago, said Mercedes have the “ultimate goal of the world championship, raising the bar and doing something no one has ever done before.”

Their goal remains unchanged from a 2014-21 hybrid era they dominated, although the completely new rules aimed at improving wheel-to-wheel overtaking and competitiveness through the field presents a challenge.

“The hopes are we have a competitive car,” explained Mercedes boss Toto Wolff. “It’s not a given with the new regulations. We say we want to win another title, but we don’t even know if we’re going to be in the hunt for a new title.

“What I know with this team is that we’ve always been able, even when circumstances are difficult like the beginning of last season, to dig ourselves out of disadvantageous situations.”

Mercedes became the eighth team to officially reveal their car for F1’s all-new era on Friday, and it came just a day after the FIA confirmed Masi would be replaced as race director as part of sweeping structural changes.

But while Wolff praised the “right steps” and said “it’s very encouraging to see that action has been taken”, he insisted Masi’s removal was not the reason for Hamilton’s return in 2022 – while also stressing that he was never concerned his star driver was going to leave.

“I think that adversity has always made him stronger, more resilient and determined,” said Wolff. “This is the attitude I feel in him right now and the mindset I see in the team.”

Last year was only the second time Hamilton had not won a drivers’ title since 2014, and in devastating and controversial circumstances.

He comes into the season with renewed energy and with only his third team-mate at Mercedes, with Russell having replaced Valtteri Bottas after six seasons. Russell, a graduate from the Mercedes driver line-up, has starred at Williams in his first three seasons in the sport.

“It doesn’t change me,” said Hamilton. “I think it’s always a positive when you have new blood and new energy.

“George has had an amazing career so far, in getting to Formula 1 and what he’s done within Formula 1. It’s going to be exciting to see him grow and work with him.

“I’ve had him sitting behind me before when we were working away, getting the set up on the race weekend and now I’ll be working opposite from him, collaborating with him and hopefully steering the car in the same direction. I’m excited for that.”

“Lewis was a superhero to me. You see these incredible people and you don’t think they’re human.

“Now, growing up and having the opportunity to race alongside Lewis is a real privilege for me because I’ve got such a great opportunity to learn and see how the best do it. ”

The huge rules overhaul has the potential to reset the field and although Mercedes – given their previous success – go into the season as favourites, they really have no idea where there work behind the scenes will put them.

“It does [feel as exciting as ever],” said Hamilton. “It just takes you back to being a kid. With this new era of car, we’ve never seen such a drastic change.

“It’s such a huge change in so many ways that it’s been really interesting seeing the designers and everyone coming together to find the best way of creating a masterpiece.

“We have no idea how it’s going to end; we have driven laps on the simulator but [it’s] making sure that we get the right correlation.”

Hamilton and Russell, weather permitting, are due to drive the car at Silverstone today.

The car is back in silver this year after two years in black, a change implemented to promote diversity in F1.

Wolff added: “The black livery was a clear intent and a clear demonstration of our mission to become a more diverse and inclusive team. It has become part of our DNA, but the silver colour of the Silver Arrows is as much our DNA, it’s our history.