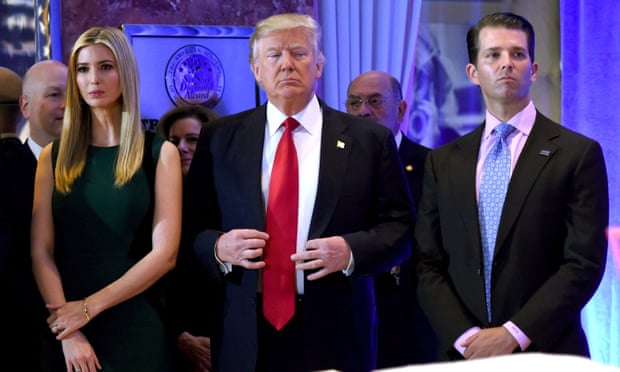 Donald Trump and two of his children have been ordered by a New York judge to appear for a deposition within the next three weeks, as part of the billowing investigation over alleged fraud in the valuation of assets belonging to his family business.

The ruling by Judge Arthur Engoron to force Trump and his two eldest children – Donald Jr and Ivanka – to comply with subpoenas amounts to a sharp escalation of the legal perils that are rapidly tightening around the former president.

The family has been striving to fend off demands for documents, information and testimony from the New York state attorney general, Letitia James. She is investigating whether the Trump Organization used “fraudulent or misleading” valuations of its assets to attract loans and reduce its tax burden.

Following a two-hour hearing on Thursday, Engoron delivered a blunt rebuttal to arguments put forward by Trump lawyers that the former president should not be subjected to questioning in the civil case because the information could be used against him in criminal proceedings that are running in parallel. The judge went so far as to say that had James not subpoenaed them, it would have been “a blatant dereliction of duty”.

Responding to the news, James said that it showed that “no one will be permitted to stand in the way of the pursuit of justice, no matter how powerful they are”.

Under the judge’s ruling, Trump must now testify within 21 days and hand over “documents and information” within 14 days. The development is the second severe blow for the former president in the space of a week.

On Monday, it was revealed that the longtime accounting firm for the Trump Organization, Mazars USA, had broken off ties with the family business, saying that it could no longer stand by 10 years of annual financial statements that it had prepared for the group.

The accountants said that they had reviewed the “totality of the circumstances” and reached the conclusion that “we are not able to provide any new work product” to the Trumps.

Now Trump and his two children must face questioning by James, New York state’s top prosecutor who has relentlessly pursued alleged irregularities in the family’s finances. The event is likely to present the former president with a legal and political conundrum.

Should he answer James’s piercing questions, he risks potentially implicating himself in a criminal investigation into Trump accounts that is being conducted by James in tandem with the Manhattan district attorney Alvin Bragg. If he pleads the fifth amendment and remains silent that could also be difficult for him.

Responding to the ruling in a statement on Thursday, Trump accused James’ office of “doing everything within their corrupt discretion to interfere with my business relationships and with the political process”.

Trump called the ruling “a continuation of the greatest witch-hunt in history and remember, I can’t get a fair hearing in New York because of the hatred of me by judges and the judiciary. It is not possible”.

In legal arguments before Engoron delivered his decision, lawyers for Trump argued that he could not feasibly plead the fifth without hurting his potential criminal defense.

“If he goes in and follows my advice, which will be you cannot answer these questions without … immunity because that’s what the law provides, and take the fifth amendment, that’ll be on every front page in the newspaper in the world. And how can I possibly pick a jury in that case?” said Ronald Fischetti, Trump’s criminal defense lawyer.

Politically, the deposition is also likely to be awkward. In the past, Trump has poured scorn on those who remain silent under questioning. During his 2016 presidential election campaign, he ridiculed the practice, saying “the mob takes the fifth. If you’re innocent, why are you taking the fifth amendment?”

Michael Cohen, an ex-vice president of the Trump Organization, said the issue raised problems for his former boss. “Let’s not forget Trump’s declaration that only guilty people plead the fifth. I wonder if that applies to him and his children as and when they remain silent,” Cohen told the Guardian in response to Engoron’s ruling.

READ ALSO:   Meet the 'inside-out' little girl who was born with her stomach, liver and bowel on the outside of her body [pics]

The judge referred to Cohen in his decision, pointing out that it was the testimony of Trump’s former personal lawyer before the House oversight committee in February 2019, in which Cohen accused Trump of “cooking the books”, that triggered the James investigation in the first place.

Cohen, who spent three years in prison himself for fraud and other offences, told the Guardian that it was “only in Trump’s delusional world that law enforcement should not be permitted to depose him and members of his family. Their concerns stem from their inability to tell the truth and risk additional perjury charges.”

Such an aggressive posture has worked for Trump over the years in staring down many of the legal challenges brought against him. But in this case, Thursday’s ruling is likely to put new wind into the sails of the James investigation and make an easy get-out clause less likely.

The James investigation, combined with its criminal Manhattan equivalent, are now top of the league of a plethora of legal troubles facing the former occupant of the White House. A Guardian tally this month found that Trump was facing a total of 19 legal challenges, six of which involve alleged financial irregularities.