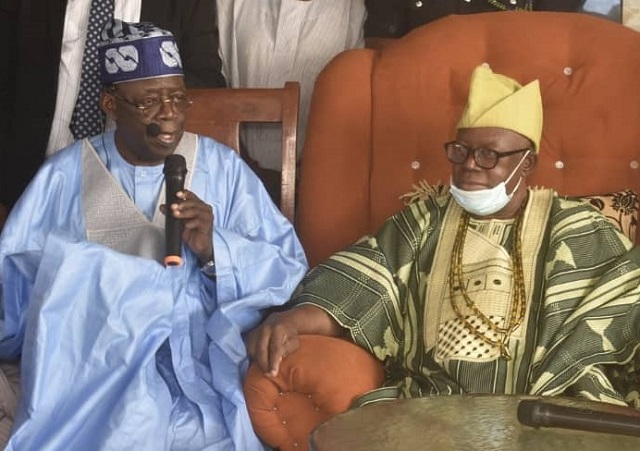 The Olubadan-Elect Senator Lekan Balogun has not and will not endorse any aspirant or political party in the forthcoming elections.

The insinuation of endorsement of Asiwaju Bola Ahmed Tinubu after his recent visit to the Olubadan-elect is not true.

Speaking after the recent visit of All Progressives Congress(APC) presidential aspirant Asiwaju Bola Tinubu to the Olubadan-elect, the Olori, Ambassador Joyce Anene Balogun, told journalists that she has received several calls that the Olubadan-elect has endorsed Tinubu.

According to her: “I like our people to know that there was no such thing.”

Asiwaju Tinubu’s visit, she said, “was purely a congratulatory visit to my husband, a normal courtesy visit notable people make to one another.

“We highly appreciate this and thank Asiwaju Bola Tinubu for coming to assure the Oludan-elect that the people of Nigeria appreciate him for what he has done for the nation and the people of Ibadan especially.

“However, the visit of Asiwaju, or of any politician at all, should not be construed as an endorsement of contestants or political parties.

“The Olubadan-elect is non-partisan. As the father of the people of Ibadan and the nation, he would not be one sided. All that the Olubadan-elect did was to pray for Tinubu and asked that every politician coming out to contest for elective offices in the future should think about the people and how to improve their lives.”

This, the Olori said, “is the passion of my husband. He loves the people, desires to improve their lives and make them more comfortable. He also talked about the youths and wants them to feel they are a part of the country and give their best to the country.

“These are what the Olubadan-elect said. I was there. There was nothing like endorsing anybody or a political party. My husband doesn’t care who gets there.

“He wants the right person in power and him to be conscious of the needs of the masses, the youths and the aged. He wants the best for the nation,” she said.