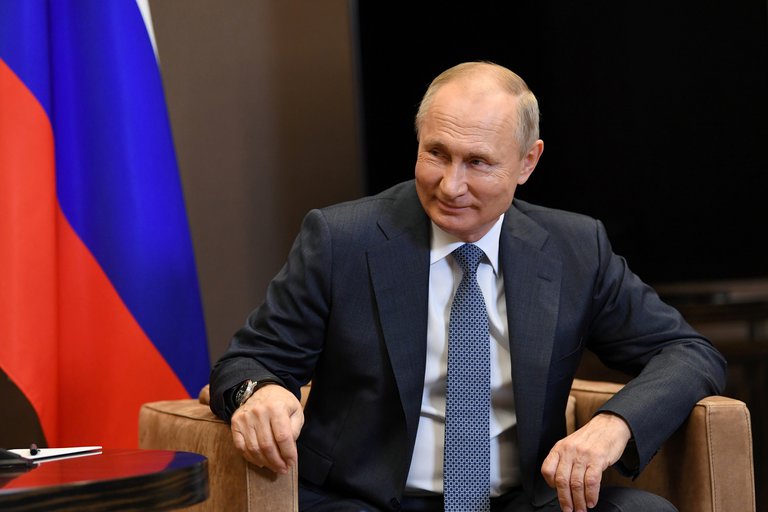 All eyes are on Russia this week as the West’s growing docket of financial penalties deal a harder-than-expected blow to the country’s economy, challenging a decades-long effort by President Vladimir Putin to make the system sanction-proof.

To add to the economic blowback, Corporate America and a growing number of multinational companies have joined in protest of Moscow’s military attack on Ukraine, moving to sever business dealings with Russia or take a stand in support for Ukrainian refugees.

Measures by the U.S. and Europe, including a move to block some Russian banks from the SWIFT payment network and sanctions on the Central Bank of Russia, have already sent the ruble cratering more than 30% and kept the Moscow Stock Exchange closed on Monday. A sharper economic fallout is underway, with JPMorgan warning the country is poised to enter a recession.

More penalizing announcements from multinational companies expected in the week ahead are likely to further derail the economic picture for Russia and the way of life for its citizens.

The repercussions for Russia’s financial system, even in early stages and still widening, have already proved so consequential that Deutsche Bank strategist Jim Reid deemed recent events “a financial war.”

JPMorgan was the first bank on Wall Street to make a bet on the economic fallout for Russia that could ensue, estimating the country’s economy could contract 20% quarter over quarter, saar [seasonal adjusted annualized rate], in 2Q, and around 3.5% for the year.

“These sanctions will almost certainly hit their mark on the Russian economy which now looks headed for a deep recession and the imposition of capital controls,” JPMorgan’s team said.

Here are the first round of actions from a host of big-name companies that began to trickle in recent days:

The Swedish retailer said Wednesday it is temporarily pausing sales in Russia. Its stores in the Ukraine have already been temporarily shuttered for safety reasons.

“H&M Group cares for all colleagues and joins all those around the world who are calling for peace. Clothes and other necessities are donated by the company. H&M Foundation has also made donations to Save the Children and to UNHCR,” the company said in a press statement.

The luxury retailer is the latest company to respond to Russia’s invasion of Ukraine by suspending all wholesale and e-commerce sales to Russia.

On Wednesday, in a press release the retailer said: “We stand with all of those who are impacted by the violence. We are supporting humanitarian efforts, providing aid to assist with the refugee crisis, and taking further actions to help. We have taken a number of actions in response to the conflict. Through the Canada Goose Response Program, we are donating $100,000 CAD to the United Nations High Commissioner for Refugees (UNHCR) who are leading global humanitarian efforts in the region.”

The carmaker will suspend auto production in Russia from Friday as it struggles to source parts from overseas, according to Nikkei Wednesday. The suspension will include the halting of exports to Russia, car sales will stop when inventories run out.

The Japanese automaker said on Wednesday it has suspended exports of cars and motorcycles to Russia, A spokesperson told Reuters “difficulty in shipping vehicles and making payments was the reason for the suspension.”

Amid mounting pressure on Tech giant Apple (AAPL) to take action against Russia, the company said it has paused all product sales in the country. Apple will also remove Russian-state-controlled networks RT News and Sputnik from stores outside Russia, disable certain Apple maps features in Ukraine and halt exports into Russia’s sales channel.

Nike Inc. (NKE) stopped merchandise purchases on its website and app unavailable in Russia, indicating it cannot guarantee the delivery of goods to customers in the country.

Snap Inc. (SNAP) has halted all advertising sales to all Russian and Belarusian entities and is complying with sanctions targeting Russian businesses and individuals. The company said it stopped all advertising running in Russia, Belarus, and Ukraine.

The social media firm added that Ukraine is the birthplace of Looksery, the company that laid the foundation for Snap’s augmented reality platform, emphasizing it is the home of more than 300 Snap employees.

“What is happening in Ukraine right now is tragic, and the bravery and resilience of the Ukrainian people are an inspiration to the world,” he wrote. “Goldman Sachs will continue to take care of our colleagues, support our non-profit partners’ humanitarian efforts, and add our voices to all those calling for peace.”

DirecTV has axed the Russian-government-controlled television network RT from its lineup of channels, citing that country’s invasion of Ukraine. A spokesperson said the company, which is majority-owned by AT&T (T), is accelerating this year’s contract expiration timeline and will no longer offer their programming, effective immediately.

Mastercard (MA) and Visa (V) blocked several financial institutions in Russia, without specifying the names of firms, from using their payment networks following the rollout of Western sanctions.

“We will continue to work with regulators in the days ahead to abide fully by our compliance obligations as they evolve,” Mastercard said in a statement.

German sportswear retailer Adidas put a stop to its partnership with the Russian Football Union (RFS), joining a growing number of sports bodies in severing ties to Russian-affiliated teams or companies.

BlackRock (BLK) halted the creation of new shares for its iShares MSCI Russia ETF (ERUS) and has removed all Russian stocks from its creation baskets until further notice, citing the U.S. economic sanctions on Russian corporate and banking entities, closures to Russian securities markets, and Russian government-imposed capital controls, the liquidity of Russian securities and significant declines in its currency.

General Motors (GM) said it would temporarily halt vehicle exports to Russia in response to its invasion of Ukraine. The Detroit company sells about 3,000 vehicles in Russia and does not have plants based in the country.

“Our thoughts are with the people of Ukraine at this time,” GM said in a statement. “The loss of life is a tragedy and our overriding concern is for the safety of people in the region.”

“In light of the crisis in Ukraine, Harley-Davidson has suspended its business in Russia and all shipments of its bikes to the country,” a spokesperson said in an emailed statement to Yahoo Finance. “Our thoughts continue for the safety of the people of Ukraine and those impacted by the crisis.”

The Milwaukee-based company saw 31% of its motorcycle sales come from Europe and the Mideast last year but does not break out sales to Russia, per Bloomberg.

The Walt Disney Company (DIS) suspended movie releases in Russia and said it is working to provide humanitarian relieve to Ukrainian refugees fleeing the country. Disney issued the following statement:

“Given the unprovoked invasion of Ukraine and the tragic humanitarian crisis, we are pausing the release of theatrical films in Russia, including the upcoming Turning Red from Pixar. We will make future business decisions based on the evolving situation. In the meantime, given the scale of the emerging refugee crisis, we are working with our NGO partners to provide urgent aid and other humanitarian assistance to refugees.”

Sony paused the the release of new films in Russia, including its Marvel adaptation “Morbius.”

“Given the ongoing military action in Ukraine and the resulting uncertainty and humanitarian crisis unfolding in that region, we will be pausing our planned theatrical releases in Russia,” a spokesperson said.

Warner Bros. Entertainment Inc. pulled the plug on the release of “The Batman” in Russia due out Friday.

“In light of the humanitarian crisis in Ukraine, WarnerMedia is pausing the release of its feature film ‘The Batman’ in Russia,” a spokesperson said. “We will continue to monitor the situation as it evolves. We hope for a swift and peaceful resolution to this tragedy.”

Boeing Co. (BA) has closed its office in Kyiv and temporarily halted operations at its Moscow training campus, according to a report from Bloomberg.

Shell (SHEL) said it will exit all Russian operations, including its partnership with Russian energy conglomerate Gazprom.

“We are shocked by the loss of life in Ukraine, which we deplore, resulting from a senseless act of military aggression which threatens European security,” CEO Ben van Beurden said in a statement.

Dell Technologies (DELL) has confirmed to Yahoo Finance that it has suspended product sales in Ukraine and Russia, also providing the following statement:

“Our thoughts are with those families who have lost loved ones and all who are impacted. Our top priority, at this time, is supporting our Ukrainian team members as they attempt to relocate to a safe and secure environment. We are closely monitoring this situation and are working with employees to address their personal or family situations. We have suspended product sales in Ukraine and Russia. We will continue to closely monitor the situation to determine our next steps.”

Facebook parent Meta (FB) has barred ads from Russian state media on its website. The company also said it is in contact with the Ukrainian government and restricted access to several accounts in the country belonging to Russian state media organizations at the request of officials.

“We remain vigilant to emerging trends and stand ready to take additional action to meet the demands of this ongoing conflict,” the company said.

Twitter (TWTR) temporarily paused advertisements in Ukraine and Russia “to ensure critical public safety information is elevated and ads don’t detract from it.”

At the request of Ukraine’s vice prime minister and minister of digital transformation Mykhailo Fedorov, Tesla (TSLA) CEO Elon Musk said Starlink, the internet service offered by SpaceX, is active in Ukraine, with “more terminals en route.” A resident of Poland on Twitter also published an email indicating the E.V.-maker has made Superchargers in Poland, Slovakia, and Hungary free to help Ukrainians trying to escape the war. Tesla did not immediately respond to Yahoo Finance’s request for more information.

BP (BP) is divesting its 19.75% stake in Russian controlled oil company Rosneft. The move will come with a hefty $25 billion charge. BP has done business in Russia for three decades.

Home rental platform Airbnb (ABNB) vowed to provide free, short-term housing for as many as 100,000 Ukrainian refugees fleeing the country.

Etsy (ETSY), the online marketplace focused on handmade or vintage items, said it will cancel all balances — about $4 million worth across listing, transaction, and other fees — owed by sellers in Ukraine on its platform.

British bank HSBC (HSBC) is expected to tail off its relationships with a lineup of Russian banks including the second-largest, VTB, according to a report by Reuters, citing an internal memo.

Nasdaq Inc. and the New York Stock Exchange have temporarily suspended trading for Russia-based companies listed on their exchanges.