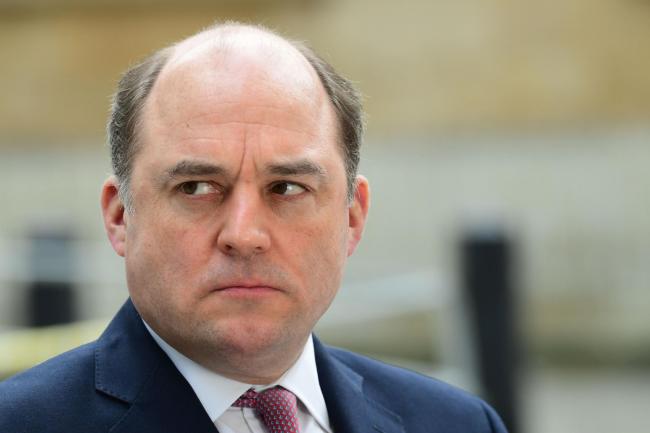 Ben Wallace has warned Vladimir Putin not to “test” the United Kingdom, as the Defence Secretary indicated that he could pour more funds into the light weapons wreaking havoc on Russian tanks and aircraft in Ukraine.

In an interview with The Telegraph, Mr Wallace said that the Russian president would be seriously mistaken if he “underestimated” Britain’s resolve to face down Putin’s aggression.

Amid fears of a potential Europe-wide spillover from an attack such as the strike by Russian forces on a Ukrainian power plant this week, he warned: “Anything that is an existential threat to Europe would elicit some form of response.”

On Sunday, Boris Johnson will issue a plea to world leaders to match their words on Ukraine with action as he sets out a six-point plan for tackling the crisis.

Writing in The New York Times, the Prime Minister stated: “Putin must fail and must be seen to fail in this act of aggression. It is not enough to express our support for the rules-based international order – we must defend it against a sustained attempt to rewrite the rules by military force.

“The world is watching. It is not future historians but the people of Ukraine who will be our judge.”

Speaking on Saturday, Mr Wallace told The Telegraph: “The thing to say to Putin is don’t underestimate us, don’t test us. History is littered with authoritarian leaders underestimating the wider West and the United Kingdom. He clearly underestimated the international community.

“We must not be afraid of Putin. He is acting irrationally and inflicting horrors on Ukraine. But if we stick together and refuse to be intimidated, then I believe he will fail.”

The Defence Secretary’s intervention came after Mr Johnson warned that Russia’s attack on the Zaporizhzhya nuclear power plant in south-eastern Ukraine jeopardised “the safety of all of Europe”, risking “radioactive clouds” spreading over the Continent.

Separately, Putin on Saturday warned that any attempt to impose a no-fly zone over Ukraine would make the relevant countries direct “participants of the military conflict”.

Russia’s foreign ministry told the west to stop “pumping weapons” into Ukraine, warning they could fall into the hands of terrorists, posing a threat to airlines.

In 2014, a Malaysian Airlines plane travelling from Amsterdam to Kuala Lumpur was shot down over eastern Ukraine.

Russia denied involvement in the attack, however Dutch investigators concluded the aircraft was shot down by pro-Russian separatists who mistook it for a Ukrainian military vessel.

Ukrainian forces have heralded UK-supplied light anti-tank weapons as a game-changing part of their defence of the country and numerous social media pictures and videos have shown such hardware being used to destroy armoured vehicles.

Mr Wallace said: “This war will give us lots of pause to think about the balance of investment decisions. What I’m seeing anecdotally at the moment, is that armour doesn’t fare very well against modern personal weapons, if you can call it that.

“The proliferation of precision and technology that allows an NLAW [next generation light anti-tank weapon] to destroy tanks such as T-80s has got to mean you ask questions about where you put your investments.”

He insisted that “there will always be a role for tanks” in the British military, but added that Russia “has also shown how vulnerable its aircraft are to Manpads, portable anti-air, as opposed to big anti-air systems”.

On Sunday, Lord Frost, the former Cabinet Office minister, and Sir Michael Fallon, the former defence secretary, will warn that overall defence spending must increase following Putin’s invasion of Ukraine, with some senior Tories insisting that funding should rise immediately by at least 25 per cent.

Asked whether he supported an overall increase in spending, Mr Wallace insisted that he had already secured £24 billion of additional defence funding, but added: “We got £24 billion pounds extra. Can we change those choices? I think we’ll look at the lessons of Ukraine. And the Prime Minister has always been open to [the idea that] if the threat changes, of course we look at those funding levels.”

Mr Wallace also indicated that Ukraine’s forces may be gaining access to intercepts of Russian forces communicating via telephone calls and messages due to poor radio equipment.

He said: “It’s very clear that Russia’s comms are so bad that soldiers are using everything they can to communicate on the Russian front line. And of course, that makes you deeply vulnerable.”

Separately, he raised the prospect that the Russian president could be toying with Emmanuel Macron, his French counterpart, in continued discussions between the two leaders.

“I think there is no harm in someone trying to talk to President Putin. What I find interesting is every time he rings President Putin, President Putin asks for more. It’s almost as if Putin is toying with him,” said Mr Wallace.

Nato leaders have ruled out imposing a no-fly zone over Ukrainian airspace to protect its troops from Russian forces, fearing it would trigger a wider conflagration potentially pitting the US against Russia.

However, speaking on Russian television to employees of Aeroflot, Russia’s national airline, Putin said: “Any movement in this direction will be considered by us as participation in an armed conflict by that country.”

In what is being interpreted as a nuclear threat, he added that imposing a no-fly zone would have “colossal and catastrophic consequences not only for Europe, but also the whole world”.

On Saturday, Antony Blinken, the US secretary of state, met Dmytro Kuleba, the Ukrainian foreign minister, on the Poland-Ukraine border in a show of solidarity on day 10 of Russia’s invasion of its neighbour. Mr Blinken insisted that Ukraine was “going to prevail”.

Speaking in a private call to US senators, Volodymyr Zelensky, the Ukrainian president, made a “desperate plea” for more planes to help his country fight the Russian invasion.

His call came as unarmed civilians protested against Russian troops in the occupied city of Kherson and in the besieged city of Melitopol.

Hopes of localised ceasefires in the besieged cities of Mariupol and Volnovakha suffered a setback as continued bombardment hampered efforts to evacuate civilians just hours after Russia announced the deal.

Despite the dogged early resistance of the Ukrainian army, the US and other allies are making contingency plans for a Russian military victory, according to The Washington Post. The first step involves setting up a government-in-exile in Poland.

The Ministry of Defence warned in a tweet that a proposed Russian ceasefire in Mariupol was likely to be used to “deflect international condemnation” of the invasion and to allow Moscow to reset its forces for a renewed offensive.

Fierce clashes continued around Kyiv on Saturday as the Ukrainian army tried to stall Russian forces and avoid the capital being encircled.

Oleksiy Kuleba, the regional governor, told local media: “Today we do not understand how to evacuate these people; how to help them. They are running out of water and medicines. These are people with certain special needs. They need constant help… many of them have been bedridden for years.”

The plea came as recordings emerged from the control room of the Zaporizhzhya plant of operators on Friday morning, urging Russian troops not to attack the facility:

According to the latest United Nations figures, nearly 1.37 million people have fled Ukraine since the start of the Russian invasion, in what is becoming the largest flow of refugees in Europe since the Second World War.

Filippo Grandi, the UN’s high commissioner for refugees, said: “This is the fastest moving refugee crisis we have seen in Europe since the end of World War Two.”

READ ALSO:   How U.S. Will Recover $10.7 Million From Obinwanne Okeke

According to the UN, as many as four million people may try to leave the country to escape the war.

Israel has offered to mediate in the conflict, but Mr Bennett’s officials have previously played down expectations of a breakthrough.

Talks between Moscow and Kyiv to seek a way to end the wider conflict will resume on Monday.

As international tension continues to grow, British nationals were told to leave Russia unless their presence there was essential.

An update to the Foreign, Commonwealth and Development Office travel advice on Saturday said: “If your presence in Russia is not essential, we strongly advise that you consider leaving by remaining commercial routes.”

Russia’s foreign ministry threatened to impose what it described as tough, but proportionate, measures against British interests in Russia this week over what it called “sanctions hysteria” in London over the Ukraine conflict.

In the meantime, Lord Frost has warned that Putin thought he could “try it on” because of years of “Western performative diplomacy”, including a focus on climate change.

Writing in The Telegraph, he said: “We let the WHO [World Health Organization] be taken over by the Chinese, but still treated it as neutral on Covid. We let UN human rights bodies be dominated by human rights violators, but still behaved as if they were sources of moral authority. We deserted our friends in Afghanistan. No wonder Putin thought he could try it on.”

More than £85 million in aid for Ukraine has been raised by people in the UK and the British Government through the Disasters Emergency Committee.

At the same time, workers have refused to unload Russian oil from a German-flagged ship moored at the Stanlow Oil Refinery in Cheshire.

The Unite union said that the cargo was not included in the UK Government’s ban as it was on a German-flagged vessel, and called for ministers to close the loophole.

Elsewhere, hundreds gathered in London’s Trafalgar Square on Saturday to condemn the invasion, with many calling for the West to stand firm against Putin.

On one giant banner was written: “When the last Ukrainian soldier falls, Putin will come for you ladies and gents.”

The crowds, who also called for Ukrainian refugees to be allowed more freely into Britain, sang Ukraine’s national anthem.