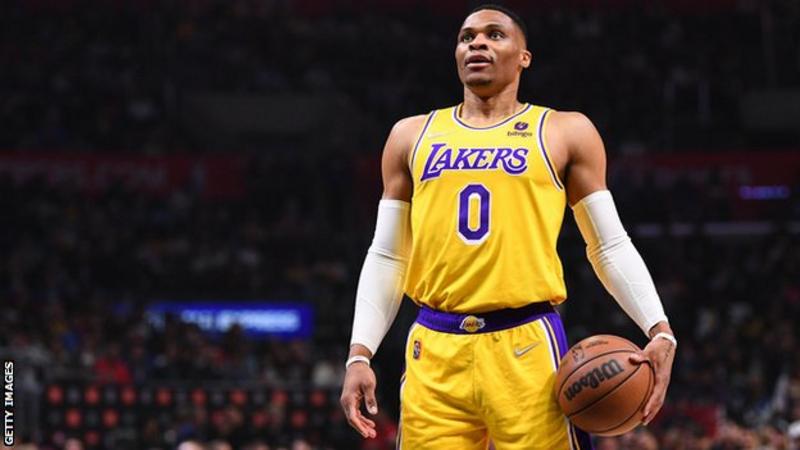 Los Angeles Lakers point guard Russell Westbrook says he will “address” anyone “shaming” his name after the 117-110 defeat by the San Antonio Spurs.

The 33-year-old’s wife Nina has written on Twitter about the death threats and abuse she has received.

The Lakers are ninth in the NBA Western Conference and Westbrook has been the focus of many fans’ disappointment.

“When it comes to basketball, I don’t mind the criticism of missing and making shots,” he said.

“But the moment it becomes where my name is getting shamed, it becomes an issue.”

Westbrook said he realised the scale of the problem recently when speaking to his son Noah’s teacher, who relayed how proud the four-year-old was of his surname.

“I kind of sat there in shock, and it hit me, like, ‘I can no longer allow people (to besmirch my name),’” said Westbrook, who scored 17 points and made 10 rebounds against the Spurs.

“A lot of times, I let it slide. But now it’s time to put a stop to that. Every time I do hear it now, I will make sure that I nip that in the bud.

“I don’t even want to bring my kids to the game because I don’t want them to hear people calling their dad nicknames and other names for no reason because he’s playing the game that he loves.”

Defeat was the Lakers’ fifth in six matches, while Spurs coach Gregg Popovich claimed his 1,335th win in the regular season to tie Don Nelson’s record.

Dejounte Murray scored 26 points and made 10 rebounds and eight assists as the Spurs ended a four-game losing run.

READ ALSO:   Crypto market has lost $2 trillion from its peak as Bitcoin struggles to stay above $20K

The Lakers were without LeBron James, who has a sore left knee after his 56-point return in Saturday’s win over Golden State Warriors.

Jokic shines for Nuggets as Embiid stars in 76ers win

Jokic scored 32 points, with 15 rebounds and 13 assists, to help the Nuggets to a ninth win in 10 games.

Joel Embiid’s 43 points, 14 rebounds and three blocked shots helped the Philadelphia 76ers to a 121-106 win as Chicago Bulls slipped to a fifth loss in a row.

Seven of Cade Cunningham’s 28 points came in overtime as the Detroit Pistons claimed a third successive win for the first time in three years with a 113-110 victory against the Atlanta Hawks.

The Minnesota Timberwolves beat the Portland Trail Blazers 124-81 as Malik Beasley scored 19 points hours after being fined $35,000 (£27,000) by the NBA for making unnecessary and inappropriate contact with Portland’s Drew Eubanks in Saturday’s game.

Victor Oladipo made his return from thigh surgery for the Miami Heat – his first game since April 2021 – in a 123-106 win over the Houston Rockets.

The New York Knicks came from behind to beat Sacramento Kings 131-115, while the Dallas Mavericks saw off the Utah Jazz 111-103, their fifth straight win.