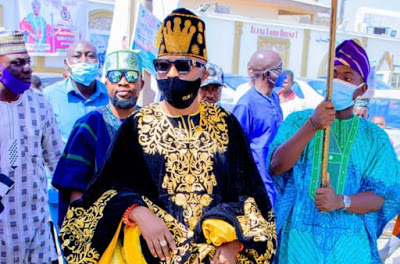 All is set in Kano for the wedding ceremony of the Oluwo of Iwo land, Oba Abdulrosheed Adewale Akanbi (Telu 1) and Kano Princess, Firdaus Abdullahi.

The 27-year-old is a niece of Emir of Kano, Aminu Ado Bayero.

The wedding, which is scheduled to hold on March 19, 2022, will take place at the residence of the Madakin Kano, in Kano.

Firdaus, a granddaughter of the deceased Emir Ado Bayero, will hold a grand reception strictly for ladies at Gidan Rumfa inside the Kano Emir’s palace shortly after the wedding.

Oluwo is remarrying barely three years of divorce from his first marriage with a Jamaican woman.

A letter had trended on social media about a month ago where the Oluwo was allegedly soliciting financial support for the wedding from the governor of Osun State.

However, the palace, on 11th February, quickly released a statement to refute the claim, saying the letter was fake and not from the Oluwo.