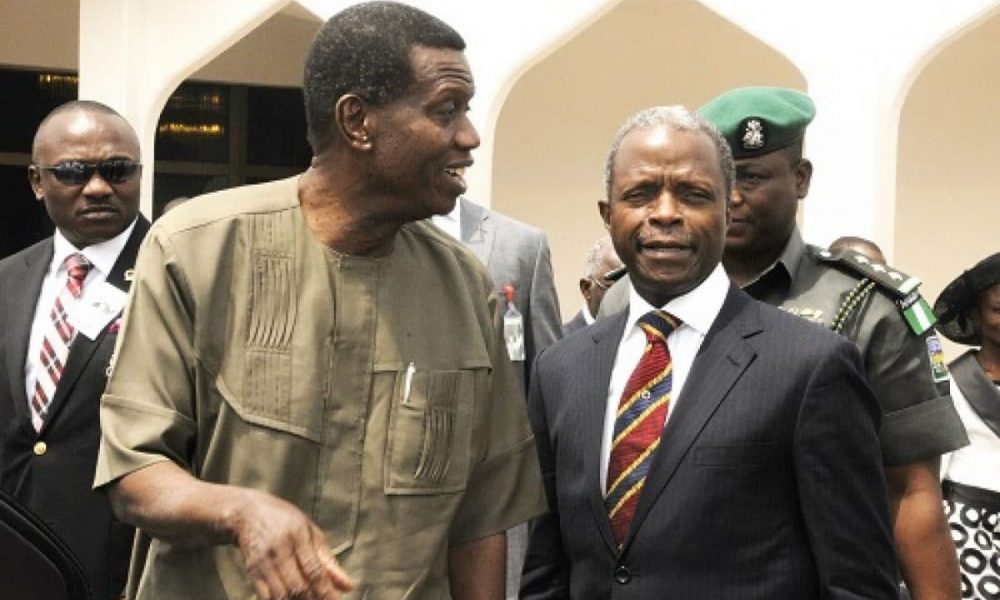 The Redeemed Christian Church of God led by Pastor Enoch Adeboye has said that its newly created Office of Directorate of Politics and Governance has nothing to do with Vice President Yemi Osinbajo or any person, who may have political ambition in 2023, PUNCH reports.

According to RCCG Head of Media and Public Relations, Pastor Olaitan Olubiyi, the politics directorate of the church was created to sensitise members of the church for active political participation including getting their Permanent Voter Cards ahead of the 2023 general elections.

Olubiyi also said RCCG has been creating political awareness for its members since the transition from military to civil rule in 1999 and there was nothing new about the development.

He said Christians cannot afford to act ignorantly by staying off politics because the choice of political leadership affects the entire wellbeing of any people.

Advertisement
READ ALSO:   Panic As CBN Freezes Another 194 Accounts Of Firms, BDCs, Others

The RCCG spokesperson further advised other churches in Nigeria and elsewhere to emulate the activities of the church by sensitising their members to be politically involved.

In a memo addressed to all regions, provinces, zones and other levels of the church, the mission said the directorate was created for political education of its members.

It was signed by the Assistant General Overseer in charge of Administration and Personnel, Pastor John Odesola.

The memo partly read, “We write to formally notify you that the mission authority has created the Office of Directorate of Politics and Governance in the RCCG. Further to this, Pastor Timothy Olaniyan (PICP Lagos Province 12) has been appointed to lead the Office.

“You are kindly requested to appoint with immediate effect a Provincial Officer for your province and also ensure that the same is done at all levels of the church – zone, area and parish. The essence of this directorate is to help coordinate the engagement of our people who are willing to be involved in politics as well as mobilize support for them when required.”

RCCG, therefore, asked that its parishes send the details of its nominated coordinators for the office to Odesola within two weeks of receipt of the letter.

Arguably the largest church in Nigeria with parishes in over 190 nations of the world, RCCG has prominent members and pastors in governance including Osinbajo; wife of All Progressives Congress leader, Remi Tinubu; amongst others.

Although Bola Tinubu has declared interest to contest the highest political seat in the land, Osinbajo has yet to officially declare an ambition.

However, his supporters have been urging him to succeed his principal, President Muhammadu Buhari, come May 29, 2023.

Reacting, Olubiyi said while the church supports active political involvement by its members, it did not have a preferred political party.

The RCCG spokesperson said, “There is nothing connecting Osinbajo with the directorate; RCCG has been mobilising, creating political awareness long since transition from military to civil rule. RCCG has made it a policy to educate its members on political education – get voter cards, no violence.

“The directorate has nothing to do with Osinbajo or anybody. I don’t know why people are linking something the church has been doing which every organisation should be doing to him.”