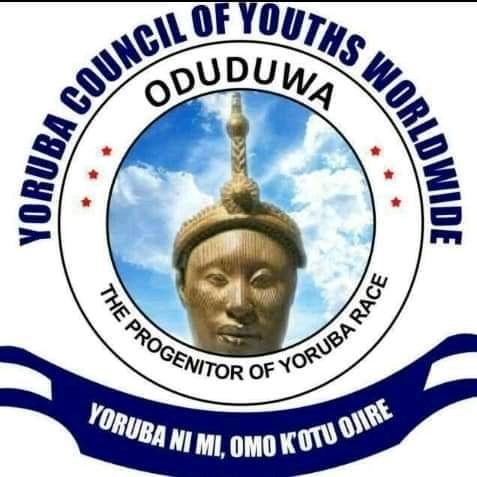 The apex Yoruba youth interest group: Yoruba Council of Youths Worldwide (YCYW) have watched with keen interest and come to a conclusion that the interview granted by Alh. Yerima Shettima on 12th March,2022 by Sun Newspaper over his outburst against the clamour for 2023 Southern Presidency is a totally false, misleading and undemocratic to say the least.

As Youth Leaders we should maintain absolute decorum and intellectual candour in our approach to delicate issues especially when it comes to who takes over the mantle of leadership from President Muhammadu Buhari come 12th June, 2023.

We are inundated with serial cancerous lack of courtesy and respect for elders, especially to Alhaji Atiku Abubakar and Asiwaju Bola Ahmed Tinubu whose fundamental rights and franchise interests are unnecessarily being bullied and dragged to public ridicule and financially induced media attacks not to vie for office of the President in 2023.

It must be categorically cleared that the North have served more terms of years in office than the South, approximately coupled with several military years of incursions that gave the North overbearing influence to live with the mentality of they are born to rule, via clanish and fallacious attacks, as well as deceitful horse-trading.

In 2015 President Muhammadu Buhari pleaded with Asiwaju Bola Tinubu for support, while in turn for Reciprocity, now comes with vicious fearsome attacks. “NO BODY IS MORE NIGERIAN THAN THE OTHERS”.

Our position is predicated on the fact that merit and equitable justice must be strictly adhered to, when it is written in our Constitution that “in the absence or death of the President the Vice President automatically takes over” which was only an act of God, but regrettably Alh Yerima left common sense and reasoning to vilified the South that Former President Goodluck Ebele Jonathan should have withdrawn from serving the complete term of his boss when both ran on a joint ticket of the PDP, consequently I put to him(Alh. Yerima)that we shall not condone further Ethnic attacks from any group or persons forthwith.

We equally stand by any Nigerian most qualified to serve and vie for election come electoral process leading to 2023 General elections, be it APC or PDP, politics is game of majority winning.

So therefore No one should teach us any “Agbero garage style” formula other than succinct free and fair democratic elections and power change process.

We as youth must be prepared to vie for positions through concerted synergy and intellectual viability among ourselves first, while the elders cannot be forced out abruptly, but through the ballots.

The choice we make today determines our tomorrow.

While we are also in line with the demand for 40% Youth inclusion in governance, it must cleared that “power is not served alakat”, we need to be more assertive as Youths to win come 2023.

We make bold to say Asiwaju Bola Ahmed Tinubu alongside any other Nigerians irrespective of creed, region, religion nor political party affiliations are eminently qualified to run for office of the President of Nigeria and other elective offices come 2023.