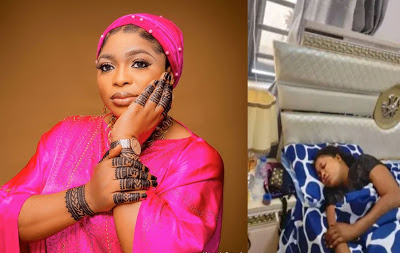 Popular Nigerian actress and filmmaker, Kemi Afolabi has raised the alarm that some internet fraudsters are exploiting her medical condition to scam people.

The actress shocked her friends, family and fans as she revealed that she had been diagnosed with lupus. The Nollywood actress further stated that her doctor told her she has five more years to live.

Basically, Lupus is an autoimmune, and inflammatory disease caused when the immune system attacks its own tissues. It can also be referred to as Systematic Lupus Erythematosus (SLE). It can affect the joints, skin, kidneys, blood cells, brain, heart and lungs.

Afolabi made the revelation during a recent interview with media personality, Chude Jideonwo.

Speaking on how these internet scammers have begun to use her plight to dupe unsuspecting people the ace actress via her verified Instagram account wrote, “It has come to my notice that some malicious individuals are taking advantage of my situation by using my name and image against my consent on Facebook.

“I am Kemi Afolabi/Afolabi Kemi on Facebook. I hereby beckon on all my fans and lovers to disregard and report these impersonators. Let’s ensure that unsuspecting individuals do not fall victim to fraud from these impersonators, thank you.”

Born on April 28, 1978, the actress who holds a degree in law from the University of Lagos picked interest in acting while still in the tertiary institution when invited by the students of the Department of Creative Arts to join them in their theatre production.

She started professionally as an actress and debuted in the movie Alagba. However, she took a break from acting in 2008.

In 2013, Kemi Afolabi returned to the movie industry not just as an actress but also as a scriptwriter and producer.

Kemi Afolabi is married to Wale Adesipe, an engineer and building contractor. Together they have a daughter Darasimi.