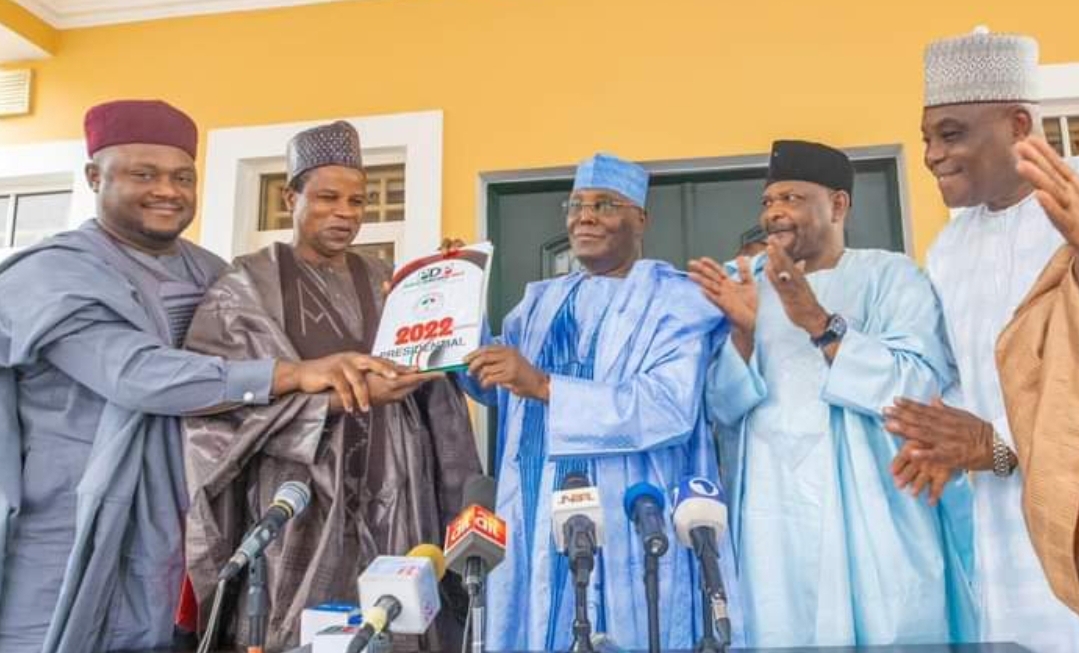 Former Vice President Atiku Abubakar has obtained the nomination form of the People’s Democratic Party, PDP, to contest for president in 2023. A group, North-East Business Forum, claimed the purchase of the form for him.

The move follows a similar trajectory where a coalition of support groups claimed they bought the nomination form for the wealthy politician I the 2019 elections.

The Chairman of the forum, Dalhatu Funakaya, presenting the forms to Mr Abubakar at his Asokoro residence in Abuja, said the gesture was in fulfilment of their promise to foot the bill for his nomination forms.

“We made a pledge in Gombe in November 2021 and we called on him to contest and pledged to purchase nomination form for him,” Mr Funakaya said.

He expressed optimism that with the fulfilment of their part, Mr Abubakar would declare for the 2023 presidential election.

Responding, the former vice president commended the forum’s gesture and recalled how the same gesture was extended to him for 2019 general elections, which made him emotional.

“In 2018 or 2019 some young men contributed money and bought a nomination form, the first in political history since the return of democracy to our country and truly they made me shed tears.

“They put together their hard earned money and purchased me a nomination form, that actually brought tears from my eyes. I was emotional about it.

“Now again today like the chairman of the North East Business Forum said, we were invited and another gesture was extended to me. It was a promise. And today it is a promise fulfilled,” he said.

The PDP commenced sales of nomination and expression of interest form to aspirants that want to contest 2023 general elections in the platform of the party on Thursday.

The PDP National Executive Committee (NEC) on Wednesday at its 95th meeting approved guidelines for the conduct of its primaries for all elective position, fixing the presidential expression of interest form at N5 million and nomination form at N35 million.

Also speaking, the founder of Africa Independent Television (AIT), High Chief Raymond Dopkesi, described Mr Abubakar as a man with capability to tackle the challenges of lack of unity, economic distress and ensure progress of youths.

Mr Dokpesi applauded the business community in the North for recognising the capacity of the aspirant whom he described as a foremost investor in Nigeria.

He added that Mr Abubakar’s wealth of experience in the private and public sectors made him the most suitable person for the office.