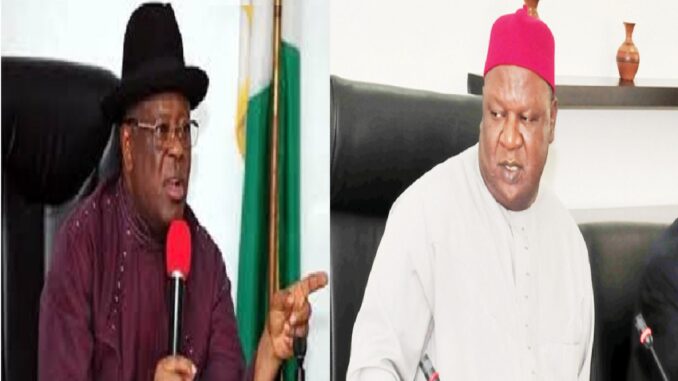 A statement issued by the state’s Commissioner of Information and State Orientation, Hon. Barr. Orji Uchenna Orji, alleged that the former lawmaker had engaged in financial misappropriation while in office.

The Commissioner made the allegations while reacting to reports of petition by the Peoples Democratic Party, PDP, to the Economic and Financial Crimes Commission, EFCC alleging that the state governor, Dave Umahi embezzled public fund.

According to him, the allegations was to further frustrate the governor out of office after he was sacked by court, saying that Anyim was one of those behind the petition.

Part of the statement reads, “We must note that we are aware of the sponsors of this heinous petition, particularly Sen. Anyim Pius Anyim and we shall soon expose his complicity in these senseless fabrications.

“We have not forgotten his usual style of fight against a siting Governor in his State; we have not forgotten his history and cases of massive financial misappropriation and wrecking of national treasury and his land grabbing commitments in parts of the Country including grabbing of thousands of acres of land at the Centenary City, belonging to Federal Government some of which are under serious investigation by EFCC and other Anti- graft agencies.

“We are fully aware of the unprofessional conduct and ambulance chasing character of his surrogate who authored this petition on behalf of PDP .

“We know that he has been in the business of unprofessional conduct and dirty dealings and we assure him that we shall deal conclusively with this unfounded allegations to further expose his professional impropriety”.