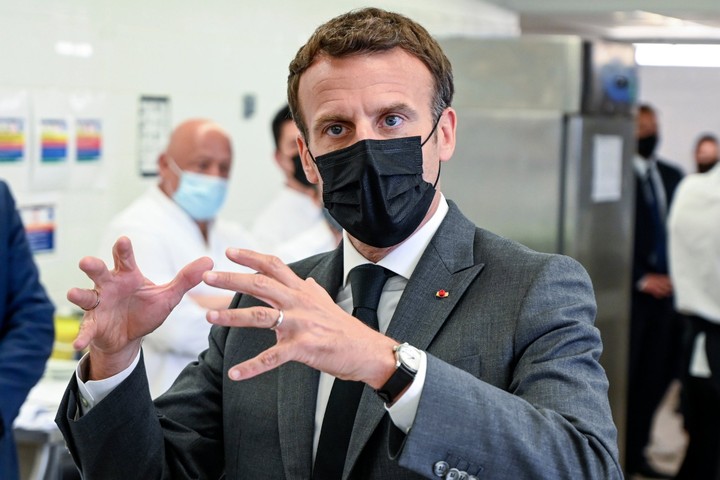 The US has been forced to clarify that it is not seeking regime change in Russia after President Joe Biden’s suggestion that Vladimir Putin is a “butcher” who “cannot remain in power” prompted concern and condemnation at home and abroad.

France’s president, Emmanuel Macron, warned against the use of inflammatory language in an already volatile situation, while the Kremlin said the “personal insults” further undermined relations between the US and Russia.

Biden’s ad-libbed remarks on Putin’s leadership, made during a speech in Poland on Saturday, were taken by many as a call for the Russian president to be overthrown.

As Russia launched symbolic missile strikes on the Ukrainian city of Lviv, 40 miles from the Polish border, Biden said Putin was “bent on violence”, adding there was “simply no justification or provocation for Russia’s choice of war” in Ukraine.

He continued: “For God’s sake, this man cannot remain in power.”

The president’s comments were swiftly walked back by both the White House and the secretary of state, Antony Blinken, who insisted the US did not have “a strategy of regime change in Russia – or anywhere else”.

Macron said on Sunday that he would not have used Biden’s words, adding that he saw his task as “achieving first a ceasefire and then the total withdrawal of [Russian] troops by diplomatic means”.

He told broadcaster France 3: “If we want to do that, we can’t escalate in either words or actions.”

Minutes after Biden spoke, the White House scrabbled to clarify his meaning, saying the president “was not discussing Putin’s power in Russia, or regime change”. According to one official, the speech was not a call to topple the Russian president, but rather an attempt to prepare the world’s democracies for an extended conflict.

Blinken was even more emphatic when he addressed the issue during a visit to Jerusalem on Sunday. “I think the president, the White House, made the point last night that, quite simply, President Putin cannot be empowered to wage war or engage in aggression against Ukraine or anyone else,” he said.

Biden’s Putin ad-lib should focus west on what its endgame should be
“As you know, and as you have heard us say repeatedly, we do not have a strategy of regime change in Russia – or anywhere else, for that matter.”

Earlier on Saturday, Biden had been asked what seeing Ukrainian refugees at Stadion Narodowy had made him think of as he deals with Putin. He replied: “He’s a butcher.”

Julianne Smith, the US permanent representative to Nato, told CNN that Biden’s words were “a principled human reaction to the stories that he had heard that day”. But she also stressed the US “does not have a policy of regime change in Russia – full stop”.

However, Senator James Risch, ranking Republican on the senate foreign relations committee and a member of the senate intelligence committee, said Biden had made a “horrendous gaffe” and created “a huge problem” when he went off-script.

“I think most people who don’t deal in the lane of foreign relations don’t realise that those nine words that he uttered would cause the kind of eruption that they did,” Risch told CNN.

“But any time you say or even as he did suggest that the policy was regime change, it’s gonna cause a huge problem. This administration has done everything they can to stop escalating. There’s not a whole lot more you can do to escalate than to call for regime change.”

The Russian government said Biden appeared to have lost his cool, adding that it was not up to the US president to determine who ruled Russia.

“A state leader should control his temper,” Kremlin spokesperson Dmitry Peskov told the state news agency Tass. “Personal insults like this narrow the window of opportunity for our bilateral relations under the current [US] administration. It is necessary to be aware of this.”

The Russian billionaire Oleg Deripaska said Biden’s speech suggested some sort of “hellish ideological mobilisation” was under way that may usher in a much longer conflict in Ukraine.

Richard Haass, the veteran American diplomat and president of the US Council on Foreign Relations, said Biden’s words had been counter-productive and damaging.