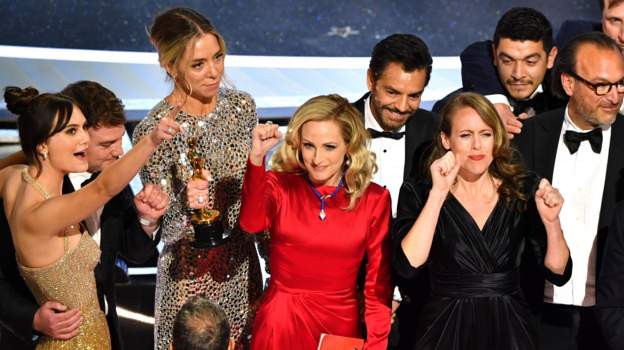 After weeks of being the presumptive frontrunner, The Power of the Dog ultimately lost best picture.

In fact, the Benedict Cumberbatch-starring Western took home just one award of the 12 it was nominated for.

It was beaten to the top prize by Coda, which won despite only having three overall nominations at tonight’s ceremony.

It becomes the first film since Grand Hotel in 1932 to win best picture with fewer than four overall nominations at the ceremony.

How did it happen? It’s ultimately down to the fact that, unlike the other categories, best picture is decided by a preferential ballot.

That means voters have to rank films in order of preference.

While The Power of the Dog was widely loved and would have received a lot of first-place votes, it was also a highly divisive film. Those who found it too slow and dull could have ranked it in ninth or even 10th place.

As a result, the more crowd-pleasing Coda was able to come through the middle and swoop the night’s top honour.

On top of the first-place votes it received, it clearly got enough second, third and fourth place votes to ultimately become the consensus choice for best picture.

Coda has won the big one! Pulling off a bit of a surprise with a win over the bookies’ favourite, The Power of the Dog.

The producers of the film, which features a family of largely deaf people who run a small fishing business with the help of their hearing daughter, thanked director Sian Heder for having “kept the boat afloat”.

“You’ve been the best captain the producers could’ve dreamed of,” they added.

They thanked the academy for “recognising a movie of love”.

The US biographical drama, which Chastain starred in and co-produced, tells the story of a real life American TV evangelist.

The actress said she was inspired by Faye’s radical acts of love.

“I’m inspired by her compassion,” she said. “I see it as a guiding principle that leads us forward, and it connects us all in the desire that we want, to be accepted for who we are, accepted for who we love, and to live a life without the fear of violence or terror.”

She continued: “And for any of you out there who do in fact feel hopeless or alone, I just want you to know that you are unconditionally loved for the uniqueness that is you.”

Cruella costume designer Jenny Beavan as appeared in the winners’ room with her Oscar.

There was some surprise that the British designer was here in person. It was understood she is currently shooting a film in Australia.

“I am! But I was allowed out on good behaviour,” she jokes. “I’m going to go back on Tuesday.”

She has now won both the Bafta and the Oscar for Cruella.

“I find it quite odd in one way, but I’m so thrilled for my team, because it absolutely cements the fact that they were the best in the world. What they did for me and the film was extraordinary,” she says.

“Their sheer creativity and generosity in the ideas they produce, and their skill, I had some of the most top people.”

Following Cruella, she’s moving on to Mad Max sequel Furiosa, which is quite a change of tone.

“You know, I’ve done it all my life,” she reflects. “I’ve gone from one job to the other and they’ve been so different, that’s the joy of the job. And obviously I’ve worked on Mad Max Fury Road, but that’s what I do, I duke around.”

The Power of the Dog filmmaker became the first woman to be nominated twice for this award.

In her acceptance speech the Kiwi, who collected the award from Kevin Costner, said: “I love directing because it’s a deep dive into story. The task of manifesting a world can be overwhelming. The sweet thing is I’m not alone, On The Power of the Dog I worked with actors I’m moved to call my friends.”

Campion thanked the late author, adding: “He wrote about cruelty, wanting the opposite – kindness.”

In an emotionally charged and very tearful speech, Will Smith used part of his time on stage – for winning best actor for King Richard – to apologise for hitting Chris Rock in the face on stage.

In the film he plays the father of tennis stars Serena and Venus Williams in King Richard.

He added: “Art imitates life. I look like the crazy father just like they said about [his character] Richard Williams. But love will make you do crazy things.”

He said much of his time making the film was spent “protecting” his fellow actors, just as Richard Williams had protected and nurtured his family.