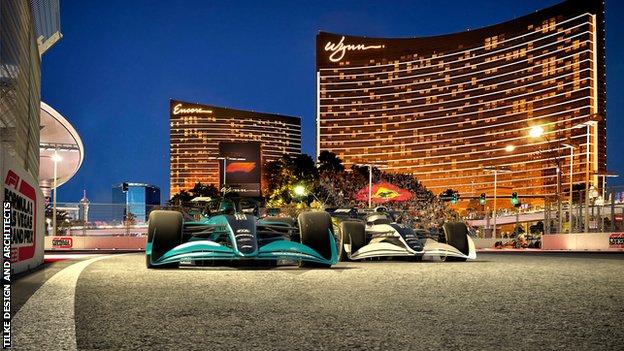 Formula 1 will have a third race in the USA from next year after securing a deal for a Las Vegas Grand Prix.

The 3.8-mile track will include a portion of the Nevada resort city’s famous Strip.

It will be a night race and will be held on a Saturday. The eight-hour time difference will mean it is broadcast early on Sunday morning in Europe.

Las Vegas joins the US Grand Prix in Austin, Texas, and the new Miami event, which makes its debut in May this year.

F1 president Stefano Domenicali said: “This is an incredible moment for F1 that demonstrates the huge appeal and growth of our sport with a third race in the US.”

The move is the culmination of more than three decades of F1 trying on and off to secure a race in Las Vegas that incorporates the Strip as part of the track layout.

As such, it represents a realisation of a major ambition by F1 owners Liberty Media, who have made expanding the sport’s reach in America a key aim since taking over in 2017.

Domenicali, who was in Las Vegas for the announcement of the race along with Liberty Media chairman and chief executive officer Greg Maffei, added: “Las Vegas is a destination known around the world for its excitement, hospitality, thrills, and of course, the famous Strip.

“There is no better place for Formula 1 to race than in the global entertainment capital of the world and we cannot wait to be here next year.”

A statement from F1 said the track would “sweep past some of the world’s most legendary landmarks, hotels and casinos”.

F1 said the race will be 50 laps long and that the circuit will have “three main straights and 14 corners, including a high-speed cornering sequence and a single chicane section”.

The race is being promoted in partnership with some of the major casino and hotel groups in the city, including Caesars Palace, Wynn Las Vegas, MGM and the Venetian.

F1’s growth in the US

Austin has been a major success since the Circuit of the Americas made its debut on the calendar in 2012, and the Miami race at the Hard Rock Stadium is already seeing huge levels of interest.

F1 has held a grand prix in Las Vegas twice before, in 1981 and 1982, when former boss Bernie Ecclestone staged a race in the car park at the Caesars Palace casino.

Through the 1990s, Ecclestone worked with various parties in Las Vegas to try to secure a race on the Strip, but his attempts were always stymied by the refusal of the casino owners to close the famous road. He revived the plans from time to time but never succeeded in securing a deal.

This time, the casinos and hotels are all on board, and it seems this has come about as a result of F1’s growing momentum in the States, which many put down largely to the new audience created by the Netflix show Drive to Survive.

Domenicali has also worked assiduously on relationships with power-brokers in Las Vegas since he took on the job at the start of 2021.

In the 1960s and ’70s, F1 had a permanent home in the US at Watkins Glen in New York State, which was joined by a street race at Long Beach, California from 1978.

Watkins Glen’s tenure came to an end in 1980 and Long Beach followed it off the calendar after 1983, both for financial reasons, and F1 spent the 1980s as an itinerant presence in America, cycling through a series of anonymous tracks in cities around the country, none of which were a success.

It seemed to have found a permanent home with the move to a road course inside the famous oval track at Indianapolis Motor Speedway from 2000-7.

But although the event attracted large crowds, F1 sabotaged its own future there with a controversial race in 2005, when only six cars took part because of a row over tyres, handled badly by F1’s bosses.

That meant Indianapolis’ contract was not renewed, and the US fell off the calendar until Ecclestone landed the Austin race from 2012.

Austin was a hit from its beginning, and has only grown in stature since, but Ecclestone failed in his attempts to secure a street race overlooking the Manhattan skyline in New York in the 2010s.

And it has taken the advent of Liberty, which bought F1 in 2017 and ousted Ecclestone as chief executive, to usher in what appears to be a new era of success in the States.